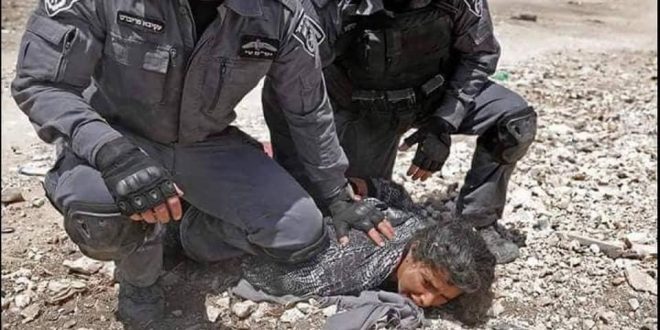 The community of Khan al-Ahmar, joined with human rights defenders, popular committees, and Palestinian officials thank all members of the international community, as well as international organizations, Diplomats from the U.N., the E.U. and many European governments, in their support and all attempts in helping stop the imminent threat of demolition.

This is the second time the community of Khan al-Ahmar has faced forcible displacement. In 1948, the Bedouin community sought refuge in Khan al-Ahmarafter they forced out of their homes in Tal Erad.

Israel’s targeting of the Palestinians such as the Bedouins in Khan al Ahmar, Al Araqib andUm Al Hiran in the Negev, draws a clear pattern of discrimination that knows no legal boundaries: they break from all international legal frameworks and apply both across the OPT and in Israel proper.

The issue of Khan al-Ahmar illustrates the Israel’s objective of widespread and systematic forcible displacement of Palestinians and replacement with Israeli settlers, as part and parcel of Israel’s broader scheme of creeping annexation.Though various in from, these policies and practices share a common underlying force: the forcible transfer of Palestinians based on their ethnicity, under the semblance of legality.

Through the implantation of the “E1” plan, Israel intends to demolish the community of Khan al-Ahmar so as to make way for the construction of more illegal settlement units. This serves the dual purpose of connecting the existing illegal Israeli settlements of “Kfar Adumim” and “MaaleAdumim” with Jerusalem, and cutting East Jerusalem off from the rest of the West Bank.

Despitethese actions having been condemned by Palestinians and the international community alike, Khan al-Ahmar is still facing the dangers of being forcibly displaced and rendered homeless.More forceful action is needed to confront Israel’s relentless colonial machine.
After the unlawful move of the US embassy to Jerusalem, Israel has been especially emboldened to take more severe measures against Palestinians living in vicinity of Jerusalem.

We therefore call upon the international community, friends and comrades of Khan al-Ahmar, to take a clear stand and fast actions against this injustice of the violent and brutal displacement the Palestinian Bedouin community for a second time by Israel, the Occupying power. The wanton destruction of property and forcible displacement of civilians is prohibited under international humanitarian law, violates the most basic of human rights guarantees, and is considered grave enough to be criminalized under the Rome Statute.

It is time to stand against these policies as emblems of grave human rights violations. Guided by the compass of justice and human rights, the international community should hold Israel accountable for its crimes against the displacement of Palestinians and the gross violation of the Palestinian Bedouin community of Khan al-Ahmar.

European diplomats have been barred from paying a solidarity visit to a school in a Palestinian Bedouin village in the West Bank under threat of demolition by Israeli authorities.

Diplomats from Belgium, Finland, France, Ireland, Italy, Spain and Switzerland on Thursday sought to visit the school in the village of Khan al-Ahmar, which is located east of Jerusalem al-Quds in the -occupied West Bank.

But they were turned back by Israeli forces at the village entrance. Police at the scene said the area had been declared a closed military zone.

“We were briefed by local leaders but refused access by security forces to the school,” the Irish representative office to the West Bank wrote on its official Twitter feed.

The consul general of France in Jerusalem al-Quds, Pierre Cochard, also told journalists at the scene that demolishing the village of 173 residents would be a violation of the Geneva Convention laying out the obligations of an occupier toward those under its control.

“We wanted to show our solidarity with this village which is threatened with destruction, for humanitarian reasons and because it is a major issue of international law,” he added.

The Israeli Supreme Court authorized the demolition of the entire village in May.

Israeli authorities hung notices around the village on Tuesday evening, warning the residents of their impending expulsion. They also issued orders authorizing the seizure of access roads to the village. Heavy equipment has since been seen there, feeding speculation a road was being prepared to facilitate its evacuation and demolition.

It is not known when the demolition will take place, but on Thursday bulldozers could be seen widening the access road to the village. Activists expect the demolition to happen within the next  few days.

Residents and activists climbed onto bulldozers and waved Palestinian flags in a bid to halt the demolition.

According to the Palestinian Red Crescent, 11 people were arrested. Dozens of Palestinian were also wounded, four of whom taken to hospital.

Dozens of journalists and activists stood at the edge of the village on Thursday.

Palestinian lawyer Munji Abdallah said, “What the Israeli authorities are doing is a population transfer contrary to the Rome and Geneva conventions.”

Khan al-Ahmar is located near several major Israeli settlements and close to a highway leading to the Dead Sea. Activists say continued Israeli settlement construction in the area could effectively divide the West Bank in two.

The expulsion of several dozen Bedouin families from Khan al-Ahmar is seen as a precursor to future expansion of the Israeli settlement of Kfar Adumim.

The European Union and the United Nations have called on the Israeli regime to halt its plan to raze the village, saying such actions are contrary to international law and undermine peace efforts.

The UN and the EU have slammed an imminent plan by the Israeli regime to raze a village belonging to Palestinian Bedouin families in the occupied West Bank.

Israeli authorities have been carrying out forced evacuations against Bedouins since 1949.

The demolition of Bedouin homes is part of the Israeli regime’s massive land grab policy, which will forcefully displace thousands of people.

Tel Aviv has so far refused to recognize the rights of Palestinian Bedouins and denies them access to basic services.