Member of the Syrian Coalition’s political committee Yasser al-Farhan said that the Assad regime is responsible for committing thousands of crimes against Syrian civilians through arbitrary detention, kidnapping, and torturing them to death.

Al-Farhan was speaking at a special session on arbitrary detention and enforced disappearances in Syria that was organized by the Euro-Syrian Democratic Forum and the No Peace Without Justice organization on the sidelines of the 38th session of the UN Human Rights Council in Geneva, Switzerland.

Al-Farhan, who is also Head the Syrian National Commission on Detainees and Missing Persons (SNCDMP), recently formed by the Syrian Coalition, stressed that detainees in the prisons of the Assad regime are subjected to systematic, brutal torture claiming the lives of tens of thousands of political Syrian dissidents.

The Assad regime did not comply with international resolutions or international conventions calling for the prevention of arbitrary arrest, torture and ill-treatment, al-Farhan said. He added that the Assad regime continued the mass arrests and kidnappings despite the fact that almost all UN Security Council resolutions condemned arbitrary detention, torture, physical liquidation and enforced disappearance against civilians in Syria. They also called for the immediate cessation of such practices and the release of all arbitrarily detained persons.

Al-Farhan said that the formation of the SNCDMP aims to help independent human rights organizations and international organizations to take tangible, practical measures to ensure the release of detainees.

“The issue of detainees is one of the most essential issues. We will not accept that it is used as a bargaining chip. We must not forget this issue nor will we accept that it is postponed until after a political solution is reached.” Al-Farhan also stressed the need to ensure accountability and not to link it to obstacles to the political solution.

The Forum of Palestinian Journalists (FPJ) has strongly denounced the Palestinian Authority (PA) preventive security apparatus in the West Bank for summoning three journalists from al-Khalil city to its headquarters in Ramallah.

The three journalists, Musab Shawer, Amjad Shawar and Amer Abu Arafeh, were summoned last Tuesday for interrogation. They had already been exposed to detention by the same security apparatus.

“We condemn the insistence of the preventive security apparatus on persecuting journalists and forcing them to sign pledges to abide by the law, especially the amended electronic crimes law,” FPJ said in a press release on Wednesday.

FPJ has called on the relevant international organizations to raise their voices and take action to protect Palestinian journalists against any violation of their rights.

The Israeli occupation forces (IOF) at dawn Thursday kidnapped five Palestinian young men, including ex-detainees, from their homes in different areas of Nablus province in the West Bank.

The detainees were identified as Wael al-Faqih, Mohamed Subaih (ex-detainee), and Mahdi Shahin.

Two other ex-detainees identified as Thabet Nassar and Mohamed Awwad were taken prisoners from their homes during IOF campaigns in the towns of Madama and Awarta.

Palestinian prisoner Israa Jaabis, aged 32, has sounded the alarm over the systematic medical negligence she has been made to endure in the Israeli HaSharon dungeon.

A lawyer from the Palestinian Prisoners’ Society quoted the detainee following a prison visit as stating that she urgently needs to undergo cosmetic surgeries in her hands, ears, face, and teeth to fix severe deformity.

The detainee also needs a burn-soothing suit and drugs to alleviate her pains.

Prisoner Jaabis, from Occupied Jerusalem and the mother of a child, was kidnapped by Israeli forces on October 10, 2015, after they opened fire at her car, blowing it up. As a result, she sustained severe burns that led to disfigurements all over her body. She also had her fingers amputated.

Jaabis is serving an 11-year-sentence in Israeli occupation jails.

The Palestinian 17-year-old minor Abdul Fatah Abu Azoum was laid to rest in his hometown, east of Rafah, after succumbing to his wounds on Thursday as he was hit by Israeli tank shell fired toward eastern Rafah, to the south of the blockaded Gaza Strip.

Hundreds of mourners crowded outside Abu Azoum’s home, as relatives and friends bid her a final farewell. Mourners then carried the body to the town’s main mosque for a funeral prayer, before marching to the town’s cemetery where he was buried.

Earlier Thursday, Israeli army fired a tank shell at two Palestinians when they approached the border fence hitting the two, who were rushed to Abu Youssef al-Najar hospital. One of them was pronounced dead shortly afterwards.

At least 133 alestinians have been killed by Israeli forces since the Great Return March began in the Gaza Strip on March 30. Fifteen children and a woman are among the fallen Palestinians. 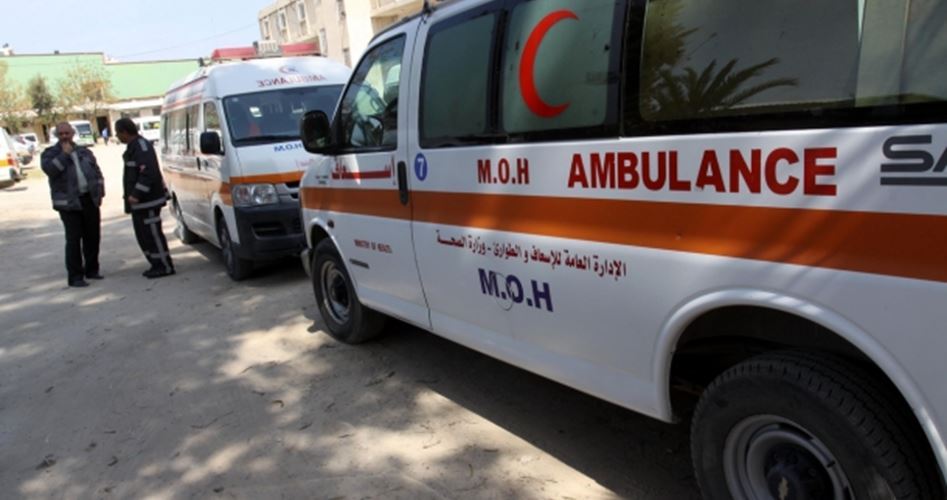 A Palestinian boy succumbed to his wounds on Thursday after he was hit by Israeli tank shell fired toward eastern Rafah, to the south of the blockaded Gaza Strip.

Israeli army fired a tank shell at two Palestinians when they approached the border fence hitting the two, who were rushed to Abu Youssef al-Najar hospital. One of them was pronounced dead shortly afterwards.

Sometime earlier, medical sources said one youth was in critical condition and the other sustained moderate injuries.

Hours earlier, the Israeli army stationed at the Gaza border had opened fire at four Palestinians who approached the fence injuring one, said to be 15 years of age, who was left bleeding on the ground until he was arrested by Israeli soldiers and taken into Israeli-occupied territory.

A number of Palestinian minors, recently arrrested by Israeli forces and currently held in Ofer detention center, were subjected to severe beating and ill-treatment during their detention, rights sources said.

According to the testimonies reported by the Palestinian Prisoner Society (PPS), the 15-year-old Khalil al-Khatib was severely beaten all over his body at the hands of Israeli forces with the butts of their rifles.

Al-Khatib was later sentenced to three months in prison.

Ahmed Saada, 17, was further subjected to a similar attack after Israeli soldiers violently stormed his family house at dawn on 7 May.

The 17-year-old Munther Abu Shama also suffered different injuries after being beaten during his arrest on 11 May.

Israeli occupation authorities are planning to push plans to double the size of an illegal settlement built on private Palestinian land near the West Bank city of Bethlehem, Quds Pressreported yesterday.

Quoting the Israeli newspaper Haaretz, Quds Press said the planned expansion of the illegal Jewish settlement would isolate the Palestinian village of Al-Walja and separate it from the rest of the Palestinian territories.

The expansion “would create territorial contiguity between Jerusalem and the Gush Etzion settlement bloc, which is adjacent to Bethlehem,” Haaretz added.

Last week, the Israeli authorities decided to move a military checkpoint to an area close to Al-Walja, separating the only public park from the village.

Israel to pay $16.7m to settlers after demolishing their illegal homes

Pro-Israel groups in Britain are urging the Co-op to end its policy of refusing to engage with Israeli produce suppliers that source from illegal Israeli settlements in the occupied Palestinian territory (oPt).

The Co-operative Group does not source any produce or own-brand products from Israeli settlements, an ethical sourcing policy that was extended in 2012 to include companies which, while based inside Israel’s pre-1967 territory, source some produce from West Bank settlements.

A petition launched by advocacy group “We Believe in Israel” calls the policy an act of “discrimination against Israeli suppliers”, and claims the stance has served “to alienate from the Co-op Group a large section of the Jewish Community and other customers in the UK who are sympathetic to Israel”.

All Israeli settlements in the oPt are illegal under international law and have been described by groups such as Amnesty International as part of an inherently discriminatory regime.

A spokesperson for the Co-op told the Jewish Chronicle that the company does not boycott Israeli businesses, and currently sells produce “from suppliers that do not source from the settlements”.

“We Believe in Israel” is an initiative of Israel advocacy organisation the Britain Israel Communications and Research Centre (BICOM). The Co-op campaign is supported by, among others, fellow pro-Israel activists, Westminster-based Labour Friends of Israel.

UK Lawyers for Israel (UKLFI) announced on Tuesday that their group had succeeded in stopping Citibank and the Arab Bank from allowing donations to be transferred to the NGO Defence for Children International Palestine (DCI-P).

UKLFI hailed the move, claiming that DCI-P had some members who were also connected with the Popular Front for the Liberation of Palestine (PFLP), a leading member of the Palestinian Liberation Organisation, considered a terror organisation by Israel.

DCI-P is an NGO that provides free legal aid for Palestinian children arrested by the occupation and documents Israeli human rights violations in the occupied territories. Established over 20 years ago, the organisation holds consultative status on the United Nations Economic and Social Council, UNICEF, UNESCO and the Council of Europe.

The group is also a long standing member of the Boycott, Divestment and Sanctions (BDS) campaign, a non-violent means of protest against the occupation, which Israel has deemed anti-Semitic, despite the movement’s sole focus on Israel’s human rights violations.

This is not the first time that organisations outside of Israel have withdrawn support from infrastructure projects in the occupied territories, alleging that Palestinian institutions support terrorism.

In November last year, the Belgian Foreign Ministry announced that it had suspended funding for a Palestinian school in the occupied West Bank after it changed its name to honour a Palestinian resistance fighter.

In August, Switzerland revealed that it had stopped funding a Palestinian NGO after it emerged that the organisation had provided funds to the Women’s Affairs Technical Committee, a group that endorses the Boycott, Divestment and Sanctions (BDS) campaign, and had also named a youth centre after resistance fighter Dalal Mughrabi.

Israeli lobby groups have often been behind such action, after convincing policymakers and businesses that any attempts at Palestinian resistance, including support of the non-violent BDS movement, equates to terrorism. In May 2017, Israel pressured the Danish government into suspending support and funding to groups that advocated for a boycott of Israeli goods.

The Israeli government has also repeatedly claimed that independent organisations and the Palestinian Authority providing crucial subsidies to the families of those impacted by the occupation, are rewarding “terrorists”. Palestinian officials have said the payments support relatives “who lost their breadwinners to the atrocities of the occupation, the vast majority of whom are unduly arrested or killed by Israel”.