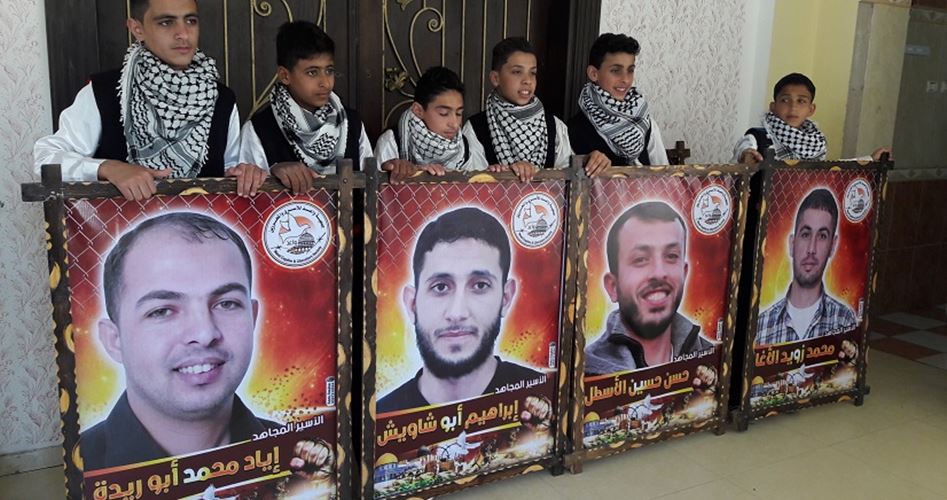 Ghassan al-Qaddumi, a researcher at the legal department of Birzeit University, has said that Israel’s administrative detention policy pursued against Palestinians is a premeditated violation of international humanitarian law.

In an exclusive interview with the PIC, al-Qaddumi said that Israel is committing a holocaust against the Palestinian prisoners.

He called on Palestinian and international human rights organizations to support the administrative detainees by internationalizing their issue and working toward holding Israel accountable for its crimes against the prisoners.

Palestinian administrative detainees in Israeli jails continue for the 89th day in a row their boycott of Israeli courts in protest at being arbitrarily held without charge or trial in a blatant violation of international laws and the Fourth Geneva Convention. 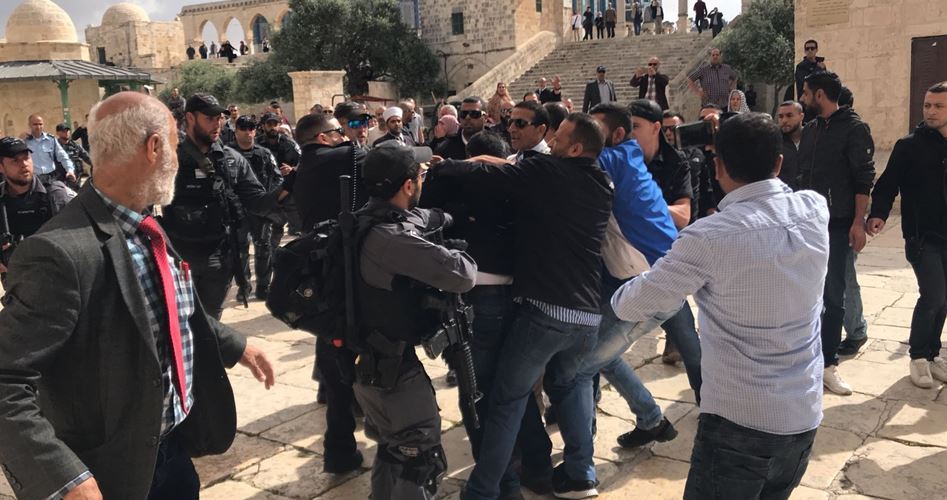 Feras Dabes, a media coordinator of the Islamic Waqf, said Israeli policemen were escorting about 500 Israeli settlers who forced their way into the site to perform rituals, provoking clashes with Muslim worshipers and Islamic Waqf personnel.

The Israeli police brutality resulted in the injury of a number of Waqf personnel. The police also arrested the guard Mohamed al-Salhi after they violently beat him.

The Islamic Waqf personnel are in charge of running the al-Aqsa Mosque compound, the third holiest site in Islam.

Over recent days, tension has prevailed across Occupied Jerusalem as Israeli settlers have been gearing up to celebrate the anniversary of Israel’s occupation of Jerusalem’s eastern part, marked on May 13.

Sometime earlier, Israeli fanatic organizations called for stepping up break-ins at al-Aqsa Mosque on the occasion of the so-called “unification day”. 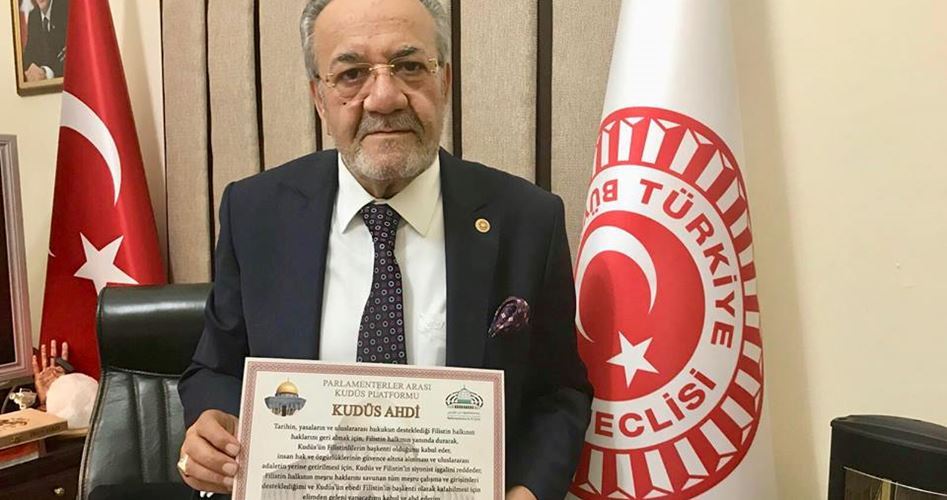 The Inter-parliamentary Jerusalem Platform on Saturday announced the participation of about 3,000 lawmakers in the Jerusalem Oath” signing campaign that was launched to support the Palestinian people’s right to the holy city.

The announcement was made on the sidelines of a symbolic “Jerusalem Oath” signing ceremony attended in Istanbul by more than 50 lawmakers from Turkey, Algeria, Tunisia, Sudan, Egypt, Palestine, Jordan, Iraq, Yemen and Libya, according to Anadolu news agency.

The Jerusalem Oath signing campaign, which started in early May, will continue in other countries, including Bahrain and Indonesia before concluding it on 14 of the same month.

US president Donald Trump’s decision to move his embassy from Tel Aviv to Occupied Jerusalem was deplored by all the participants in the event.

“We would rather die than forsake Jerusalem’s al-Aqsa Mosque,” Nureddin Nebati, a ruling Justice and Development (AK) Party’s lawmaker and head of the Inter-parliamentary Jerusalem Platform, told Anadolu on Saturday.

“The US, which acts as a mediator, should write a book on insincerity and hypocrisy. Trump’s decision was overwhelmingly rejected by the UN General Assembly. Yet the US announced that it would move the embassy on May 14. The children of this gang system [Israel] didn’t waste a minute and announced they named the square near the embassy after Trump. With the decision he made as if he was a gang leader, Trump will not get away with violating the law.”

“Jerusalem is the red line for Muslims, our unifying point. As a matter of fact, the Organization of Islamic Cooperation [OIC] was founded after 1969 incident,” he said, referring to a Christian extremist who set fire to the Mosque.

“As long as we breathe, we will reject this occupation and oppose it. Jerusalem is our city, and its people are our blood brothers. We will not let anybody steal our Jerusalem, and we support all legitimate efforts to defend Jerusalem. Jerusalem is the eternal capital of Palestine and shall always remain that way,” he said, vowing to maintain the fight till the very end.

Nebati said the Jerusalem Oath campaign, launched by the platform, has been backed by thousands of lawmakers from almost 100 countries. 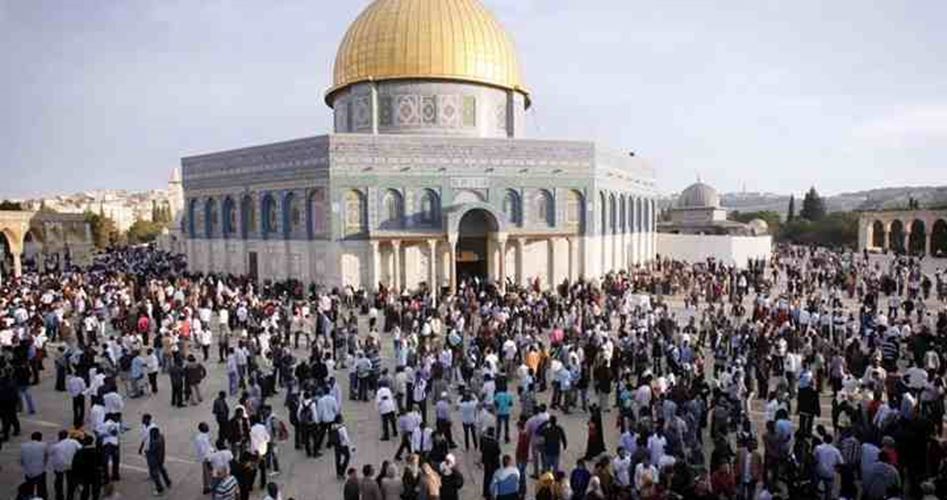 National Palestinian factions have called for a large-scale participation in rallies set to be staged on Monday to protest the relocation of the US embassy in Occupied Jerusalem.

The factions said in a joint statement that buses carrying protesters from Bab al-Sahira will head for the US embassy at 02:30 p.m. on Monday.

The national factions also announced a partial one-hour strike on Monday and called for intensifying protests across Occupied Jerusalem.

Tension has been running high across the occupied Palestinian territories after the US announced its decision to transfer its embassy from Tel Aviv to Occupied Jerusalem, a city which is home to the third holiest site in Islam—al-Aqsa Mosque. 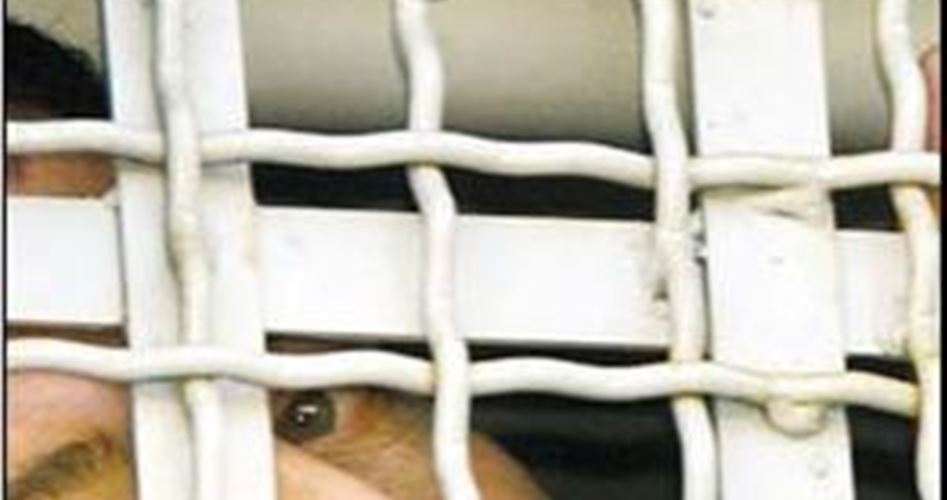 The Palestinian Prisoners Society (PPS) has warned of the exacerbated health status of prisoner Aziz Aweisat, held at an intensive care unit in Tel Hashomer Hospital.

Aweisat has fallen into a coma and lost consciousness since May 9, the day when he underwent a surgery as a result of a stroke he suffered in the Israeli Ramla prison clinic.

Prisoner Aweisat, aged 53, has been held in Israeli dungeons since 2014, where he has been serving a 30-year prison-term. He is a native of Jerusalem’s Jabal al-Mukabber neighborhood.

Samidoun Palestinian Prisoner Solidarity Network urges all supporters of Palestine and the freedom of Palestinian prisoners to participate in the events and actions around the world commemorating the 70th anniversary of al-Nakba and supporting the #GreatReturnMarch in Gaza. For 70 years, Palestinians have faced ethnic cleansing, forced displacement, massacres, imprisonment and racist oppression – a continuation of the previous 30 years of British colonization. Those past 70 years have also been years of resistance, organizing and struggle for the liberation of the land and people of Palestine.

As the Nakba continued, Palestinians struggling to return were labeled “infiltrators,” killed and imprisoned by the Zionist state. Throughout 70 years of struggle, the leaders and organizers of the Palestinian people – fighters, labor organizers, teachers, poets, writers, student and women’s movement leaders, farmers, workers, fishers – have been imprisoned in their hundreds of thousands by the Zionist state and have continued their resistance. The prisons have become symbols and spaces of oppression and also places to organize resistance,  educate young people and build revolutionary schools to develop the struggle.

Today, 49 Palestinians have been shot down in the Gaza Strip at the 1948 armistice line, delineating the arbitrary enclave into which Palestinian refugees were ethnically cleansed by Zionist militias, and later the Israeli army, where they have gathered as part of tens of thousands participating in the Great March of Return, demanding their right to return to their homes and lands and the breaking of the siege on Gaza. As Palestinians mark 70 years of ongoing Nakba, they will march again facing brutal live fire and repression that has severely wounded thousands.

To support the march for return on the anniversary of the Nakba, broad participation in the numerous events and actions around the world is essential.  Samidoun Palestinian Prisoner Solidarity Network urges supporters of Palestine around the world to mobilize on the anniversary of the Nakba to march alongside the Great March of Return and the millions of Palestinian refugees in exile and diaspora who struggle for their right to return home, the key to Palestinian liberation.

Send your events and actions to us at samidoun@samidoun.net or on Facebook to tell us about your actions in response to the Land Day Massacre and for Palestinian Prisoners’ Day.

See our constantly-updated calendar of events!

The following signs can be used in your own local events and actions. PDF download links are provided below! EU foreign policy chief Federica Mogherini speaks during a press conference on May 27, 2015, at EU headquarters in Brussels (AFP, File)

The Palestinian Ministry of Foreign Affairs released a statement, on Saturday, that strongly condemns the governments of Hungary, Romania and the Czech Republic for blocking the release of a statement by the European Union (EU) which rejected US plans to officially open its Israeli embassy in Jerusalem, on Monday, May 14th.

The statement said, according to Ma’an, that the position of these three states contradicts the EU’s policy and its previous stances towards Jerusalem.

While Israel officially annexed East Jerusalem in 1980, according to Palestinians and the international community, the city has remained an intricate part of the occupied Palestinian territory and would be considered the capital of any future Palestinian state.

The ministry called the actions of the three states a “clear breach of international law, UN resolutions, the Geneva Conventions and human rights principles,” that “encourage the Israeli occupation authority to continue violating international law.”

The official ceremony for the relocation of the U.S. embassy in Jerusalem will be held on Monday, May 14 in the Jerusalem district of Arnona, and coincides with the 70th anniversary of the Palestinian people’s Nakba, or “catastrophe,” which marks the creation of Israel in which 700,000 Palestinians were expelled from their land.

The fate of Jerusalem has been a focal point of the Israeli-Palestinian conflict for decades, with numerous tensions arising over Israeli threats regarding the status of non-Jewish religious sites in the city, and the “Judaization” of East Jerusalem through settlement construction and mass demolitions of Palestinian homes. Activists gather against the eviction of the Shamasna family in Sheikh Jarrah, March 1, 2013

At least 75 Palestinian families live under threat of eviction in the East Jerusalem neighborhood.

The eviction notice states that Israeli forces may evict 77-year-old Kneibi and her family anytime between May 13 and May 27, 2018. The pretext for Kneibi’s eviction is a suit filed by six Israelis who claim their families owned the home before 1948.

Israeli forces expelled over 750,000 Palestinians during the creation of the Israeli state in 1948, a time known to Palestinians as the Nakba, meaning “catastrophe.”

The 1970 Legal and Administrative Matters Law empowers Jews to reclaim property in East Jerusalem lost before 1948, even if they have already been compensated by the Israeli government for that loss. The Absentee Property Law of 1950 bars Palestinians from filing similar claims.

According to Peace Now, approximately 75 Palestinian families live under threat of eviction by the Jerusalem municipality – evictions carried out for the explicit purpose of opening the home to Israeli settlers. The municipality suspended evictions from Sheikh Jarrah for eight years, until the displacement of the Shamasneh family in 2017 and now the impending displacement of Kneibi.

The timing of the Kneibi family’s eviction overlaps with the commemoration of the Nakba on May 15, which Israelis will celebrate as their state’s 70th anniversary. The US government plans to inaugurate a US Embassy in Jerusalem as a gesture of shared celebration with the Israeli state. Israeli fighter jets, on Saturday evening, carried out airstrikes on an agricultural land located in the town of Beit Hanoun, northern Gaza Strip, causing financial damage to the site and to neighboring homes, according to local sources.

WAFA correspondence said that warplanes struck with about seven missiles into the targeted area, leaving financial damage and causing fire to erupt.

The airstrikes did not result in any casualties, however, but caused fear among local citizens.

In a statement, the Israeli army confirmed that “explosions heard in the northern Gaza Strip are the result of Israeli operations there.”

The attack came after Israel announced it will close the Kerem Shalom (Karem Abu Salem) crossing between Israel and the Gaza Strip until further notice.

“Due to the destruction of the Kerem Shalom Crossing on the Palestinian side, the Minister of Defence, Avigdor Liberman, approved the recommendation to close the crossing,” the army said in a statement.

Eyewitnesses, meanwhile, reported that Israeli warplanes targeted an open area of land in the town of Beit Hanoun in the northern Gaza Strip.

Palestinian medical sources, for their part, said the Israeli attack did not cause any casualties.

Tension has grown across the Palestinian territories since 6 December, when US President Donald Trump officially recognised Jerusalem as the capital of Israel.

Since border rallies began on 30 March, at least 48 Palestinians have been martyred — and hundreds more injured — by cross-border Israeli army gunfire, according to the Health Ministry.

Protesters are demanding the right to return to their homes in historical Palestine, from which they were driven in 1948 to make way for the new state of Israel.

The border rallies will culminate on 15 May (next Tuesday), which will mark the 70th anniversary of Israel’s establishment — an event Palestinians refer to as the “Nakba” or “The Catastrophe.”