Yaser Murtaja, a Palestinian journalist was shot by Israeli sniper while he was covering ‘The Great March of Return’ on 6 April 2018

A Palestinian video journalist and photographer who had just been contracted to work with MEMO has been hospitalised after being shot by Israeli sniper fire today while covering The Great March of Return near Gaza’s eastern border.

Though wearing a vest marked ‘PRESS’, Yaser Murtaja, co-founder of Ain Media production company, was shot in the abdomen by Israeli snipers perched on a hilltop on Gaza’s border. 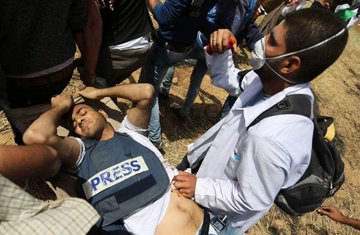 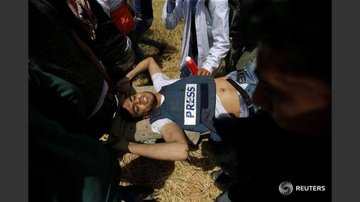 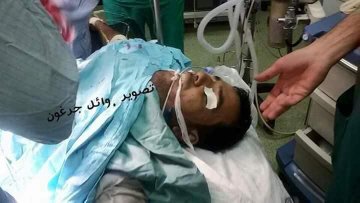 Israeli sniper shoots journalist on #Gaza border and now he is in the operation room in hospital.

Ain Media, which is made up of a dozen Palestinian media professionals, has been covering the events taking place near Gaza’s border with Israel since Friday. In the past, the team have produced work for Al Jazeera Documentaries, BBC Arabic, VICE, Alaraby TV, UNICEF, UNRWA and Oxfam amongst others.

In an interview with MEMO earlier this month, Yaser said that his passion for filming and photography was born out of his desire to document the events taking place in the besieged Gaza Strip and to do what he could to help shed light on the reality of life in Gaza and the plight of fellow countrymen under occupation and blockade.

Read: Lessons learnt from the ‘Great March of Return’

At least 23 Palestinians have been killed by Israeli forces in Gaza and more than 1,500 others wounded during the Great March of Return, a six-week demonstration and sit-in which started last Friday to mark Palestine Land Day and is calling for the implementation of the Right of Return.

Demonstrators are demanding that Palestinian refugees be granted their right to return to their towns and villages in historical Palestine, from which they were driven in 1948 to make way for the state of Israel.

In the run-up to the mass demonstrations last week Israel deployed thousands of troops on the border, threatening to use live ammunition against anyone who threatened Israel’s “security infrastructure”.