The Israeli authorities have recently deported a Palestinian mother, who is married and was living with her Jerusalemite Palestinian husband and children for the past sixteen years, after repeatedly denying her applications for residency in the occupied city.

The Wadi Hilweh Information Center in Silwan (Silwanic) said the Palestinian woman, identified as Ibtisam Obeid, 35, is married to Wisam Obeid from the al-‘Isawiya town, in Jerusalem, where she gave birth to their three children, Nayef, 14, Mohammad, 13, and Amira, 10.

Although she is married to a native Jerusalemite Palestinian man, the Israeli authorities kept denying her applications and appeals for residency over the last several years, for what they called “security considerations,” without providing further details.

Wisam said that his wife was abducted by the army twice last month, including when she and him, along with their son Nayef, were taken prisoner, before being later released, and their son received a home detention order.

“Last month, the soldiers abducted me and my wife again, and filed an indictment against her,” he said.

He added that the second time his wife was taken prisoner, she was interrogated for several hours, and was only released under the condition of being forced out of occupied Jerusalem. “They threatened to abduct and imprison me and my children, in addition to imposing high fines if she does not leave the city,” the husband stated, “before removing her from the city, the soldiers refused to allow her to go back home even to pack her clothes, and mockingly told her to say good-bye to our home.”

Ibtisam is now living with her parents, along with her daughter Amira, in Ramallah city, while her husband and two sons live at home in al-‘Isawiya.

The woman is the latest victim of Israel’s discriminatory policies against the Palestinian and their spouses in occupied Jerusalem, tearing families apart, by denying them residency and family unification documents. Palestinian medical sources have reported, Thursday, that Israeli soldiers killed one Palestinian with a missile fired from an armed drone, late on Wednesday at night, while another Palestinian died from wounds he suffered last Friday, in the Gaza Strip.

The sources said that an armed Israeli military drone fired a missile at Palestinian protesters near Erez Crossing, in the eastern part of the Gaza Strip, killing one of them, and wounding several others.

Palestinian medics were unable to enter the area due to Israeli army fire, and severe military restrictions on border areas, and were only able to retrieve his body in the morning.

The Palestinian Health Ministry said the slain Palestinian has been identified as Mojahed Nabil al-Khodary, 23, from Gaza city.

They added that the soldiers also shot five Palestinians five live fire and caused dozens to suffer the effects of teargas inhalation in the same area. On Thursday morning, another Palestinian, identified as Shadi Hamdan al-Kashef, 34, from Rafah, in the southern part of the Gaza Strip, died from serious wounds he suffered last Friday, after the soldiers shot him with a live round in the head.

He was at the Intensive Care Unit of Abu Yousef Najjar hospital, in Rafah, until he succumbed to his serious wounds.

Dr. Ashraf al-Qedra, spokesperson of the Health Ministry in Gaza, said Shadi was a young man with special needs.

Their deaths bring the number of Palestinians, killed by Israeli army fire since last Friday, to 19 Palestinians, while more than a thousand, including at least 200 children,  have been injured, many seriously. 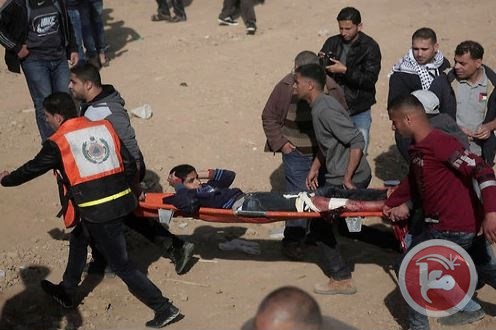 GAZA CITY (Ma’an) — A Palestinian man who was injured by Israeli live fire during Friday’s “Great March of Return” succumbed to his wounds on Thursday at noon, while Palestinian medics recovered the body of a second Palestinian, who was reportedly killed by Israeli drone fire late Wednesday night.

Medical sources told Ma’an that Shadi Hamdan al-Kashef, 34, from the southern Gaza Strip city of Rafah succumbed to a head injury he sustained with a live bullet during protests last Friday.
Meanwhile, the Palestinian Ministry of Health announced that medical teams were able to recover the body of a slain Palestinian in northeaster Gaza, along the “buffer zone” area of the border.
The man was reportedly killed by an Israeli drone late Wednesday near the border with Israel. His identity remained unknown.
As of Thursday, the death toll in Gaza had reached 20 people, since “The Great March of Return” began on Friday, when Israeli forces heavily used live fire on civilian demonstrators, killing 16 Palestinians in a single day and injuring hundreds of others.
Friday’s demonstration, in which an estimated 17,000 Palestinians participated, was the first day in a weeks-long protest which will continue until May 15, the 70th anniversary of the Nakba, or catastrophe, when more than 700,000 Palestinians were expelled from their lands to make way for the creation of the state of Israel.
Rights groups have harshly condemned Israel’s use of live fire on the civilian protesters, calling the practice criminal and illegal.
On Thursday, Israeli human rights organization B’Tselem launched a campaign entitled “Sorry Commander, I cannot shoot,” urging Israeli soldiers to refuse orders to shoot unarmed protesters in Gaza.
According to B’Tselem, the campaign will include advertisements in Israeli newspapers “clarifying to soldiers that they must refuse to open fire on unarmed demonstrators,” which the group argues are “manifestly illegal orders.”
B’Tselem criticized the Israeli military for announcing in advance that soldiers will use live fire against protesters, even if they are hundreds of meters away from the border fence, rather than taking steps to reduce the number of casualties.
(Source / 05.04.2018)