Israeli security agency Shin Bet announced, Monday, the arrest of a French citizen working in the French consulate in occupied Jerusalem, on charges of transferring weapons from the Gaza Strip to the occupied West Bank.

According to Al Ray, Israeli media quoted the Shin Bet as claiming that Frenchman Roman Frank had used his diplomatic immunity in transferring weapons in five operations.
The sources said that Frank was accused of transporting 70 pistols and two Saar arms from Gaza to the West Bank, taking advantage of the easing of security checks on foreign diplomats.
It claimed that the transfer of arms was made through a network of nine people in Jerusalem and Gaza; some of them work in the French Cultural Center and the French consulate.
The “Shin Bet” (known as Israel’s equivalent of the FBI) claimed that the French “Frank” transferred the pieces of weapons for the purpose of material gain, and on his personal responsibility without the knowledge of the French consulate.
(Source / 19.03.2018)

Israel’s Prime Minister uses attacks against the Gaza Strip to deflect attention from corruption charges against him, and the potential dissolution of his coalition government, Quds Press said on Sunday.

The comment was made after Benjamin Netanyahu took to Twitter to point out that the Israeli occupation forces had destroyed two tunnels in Gaza. He warned the international community that money being raised to help Palestinian refugees is used by “terror” groups. “It is time for the international community to recognise that Gaza aid money is being buried underground,” he alleged, in reference to the tunnels.

In response, the military wing of Hamas, Al-Qassam Brigades, said that the Israeli claims about destroying tunnels refers to old structures which were used by the Palestinian resistance during the massive Israeli offensive against civilians in the Gaza Strip in 2014. Almost 2,300 Palestinians were killed during the attack.

At least one independent observer pointed out that allegations about the misuse of humanitarian aid are also old-hat. “Charities are an easy target,” said a spokesman for British charity Interpal, “and evidence is never produced when ‘terrorist’ claims are made. The Prime Minister’s shameful allegation is clearly an attempt to cut the flow of aid to the most vulnerable people during the worst man-made catastrophe to hit the Palestinians since the 1948 Nakba.”

Residents of Hizma woke up to find car tyres slashed, and slogans spray-painted on to vehicles and walls, according to reports.

The Hebrew-language slogans included: “The Arabs of Jerusalem are considered terrorists, expel or kill them”, “Let us deal with them,” “There is no place in Israel for foreigners and the enemies of God,” and “God is our king”.

Israeli police said the incident was under investigation, but at the time of writing, no suspects had been arrested.

These attacks typically take the form of graffiti, vandalism, and damage to property, but can also entail physical assaults leading to injury or even fatalities.

Palestinians, in particular the elderly, sick and disabled, come together to call for international efforts to save Gaza from the humanitarian crisis

The Director of Al-Mezan Centre for Human Rights said on Sunday that 2017 was the worst year in the history of the Gaza Strip in terms of political, economic, cultural, social and health conditions, Felesteen.ps has reported. Issam Younis told journalists in the besieged territory that the coming days would be “worse” if the Israeli siege remains in place and the Palestinian division is not ended.

Younis called for the international community to put pressure on Israel to abide by international law and lift the 11-year-old siege on Gaza. He also called for the Palestinian Government of National Accord to stop its punitive measures against the people of Gaza, including forcing its employees in the territory into early retirement, slashing up to 50 per cent of salaries and reducing supplies of electricity, medicines and medical equipment.

According to the human rights official, the number of Gazans suffering psychological disorders increased by 21 per cent in 2017 compared with 2016, and the rate of those who are consulting psychiatrists increased by 69 per cent during the same period. Meanwhile, the marriage rate decreased by 10.8 per cent and families which are run by women increased by 9.5 per cent.

Hamas: Gaza is sitting on top of a volcano

In addition, field researcher Mohamed Abu Jray said that the Palestinians in Gaza are currently in urgent need of 102,000 residential apartments. Around 24,000 of the apartments destroyed during Israel’s wars against civilians in the enclave between 2008 and 2014 still need to be rebuilt. Indeed, only around 53 per cent of the houses completely destroyed by the Israeli occupation during the last offensive in August 2014 are suitable for human habitation.

With regards to the economic crisis, Centre staff pointed out that exports from Gaza decreased to their lowest level ever, and estimated monthly losses resulting from the siege amount to $16 million. Unemployment among young people, meanwhile, has reached 60 per cent; among women the figure is 85 per cent.

Almost 1,000 acres of agricultural land has been damaged due to Israel’s use of poisonous pesticides and the lack of a reliable electricity supply for irrigation purposes.

File photo of a school shelled illegally by Israeli forces

According to Palestinian news agency WAFA, Israeli soldiers targeted the school, located in the town of Tuqu’ in the southern West Bank, with more than 10 tear gas grenades.

Local sources told WAFA that the tear gas bombardment forced school staff to close the doors to “prevent soldiers from breaking into it”.

WAFA added that “Israeli forces deploy in the vicinity of the school on daily basis, provoking students and making it hard for them to continue their education”. 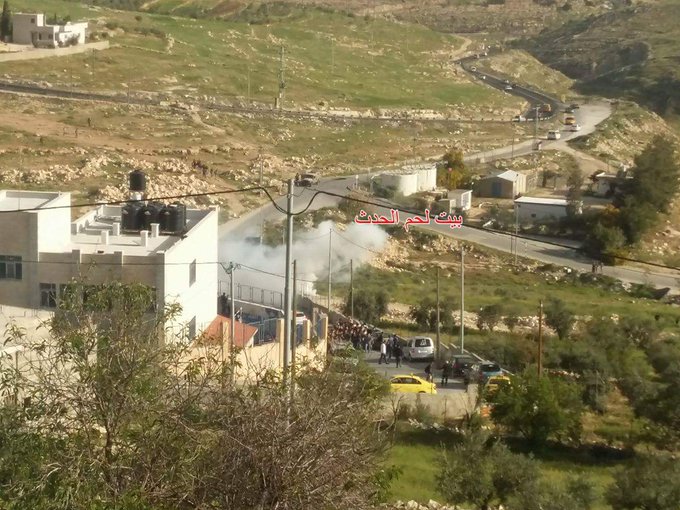 The Israeli navy opened fire at Palestinian fishermen and their fishing boats while they were sailing in al-Sudaniya sea to the northwest of the Gaza Strip on Monday.

The navy also propelled waste water at the boats forcing the fishermen to return to shore.

Despite the signed agreements between Palestinians and Israel, which allow fishermen to go 12 nautical miles inside the Mediterranean Sea, Israeli navy targets Gaza fishermen almost daily and does not allow them to go further than three nautical miles, which the fishermen say is not enough to catch fish.

This graphic video was shot on Saturday in the South Hebron Hills. It was posted by activists– including Guy Butavia and our good friend Ronnie Barkan — and is said to show a Jewish settler from a new outpost near the illegal settlement of Havat Mor releasing an attack dog on Palestinian shepherds grazing a flock. The shepherds are from the nearby Khirbet a-Rahwah village.

The dog rips off the tail of a sheep and part of its buttocks, as is evident at the end of the video. One other sheep was injured in the head.

When he is speaking Hebrew, the settler claims that the arrival of activists to the Hebron Hills ruins good neighborly relations with the Palestinians, and also that the Palestinians have “crossed a line,” according to Ofer Neiman,

This is surely akin to the horrifying video (of a Palestinian father being arrested outside Hebron as his son cries) that animated Peter Beinart to declare a crisis of Zionism seven years ago. Yesterday the American Jewish rightwing leader Ron Lauder published a piece in the New York Times discovering a crisis of Zionism in Israel’s turn to the right and its neverending settlement project; and liberal Zionist leader Jeremy Ben-Ami celebrated the article. It’s good that Lauder is stirring; but how much information does anyone need? When is enough enough? The Kishinev massacre in 1903 spurred international action by Jews against Russia after pictures were rushed out to the London and New York papers (by Zionists). Palestinians have experienced pogroms for 50 and 70 years and American Jews still cannot turn against the religious ideology that animates this settler: the idea of a Jewish national home on someone else’s land.