Israeli municipal crews, escorted by armed forces, demolished the home of the Palestinian civilian Sherif Muheissen in al-Issawiya and another belonging to Mohamed Jamal Abu Khdeir in Shu’fat.

The demolitions were carried out under the pretext of unlicensed construction.

Prior to the demolitions, heavily-armed Israeli troops cordoned off the targeted homes and prevented civilians from coming within the reach of the demolition scene.

A number of Palestinians were kidnapped by the Israeli occupation forces (IOF) at daybreak Wednesday in abduction sweeps rocking the West Bank.

The Israeli army claimed responsibility for the abduction of eight Palestinians on account of their involvement in anti-occupation activities.

A Palestinian youth sustained foot injuries in clashes that flared up shortly after the IOF stormed al-Duheisha refugee camp, to the southeast of Bethlehem.

The IOF also kidnapped a young man—Ward al-Seifi—and seized a car belonging to his family in the camp.

At the same time, Israeli soldiers ransacked Palestinian shops including one for selling jewelry in Ramallah. Clashes burst out following the assault.

A number of Palestinians were also kidnapped by the IOF from al-Khalil’s southern town of Yatta and from Bartaa town, west of Jenin province.

A series of flying checkpoints were pitched by the occupation army along the Jenin-Haifa thoroughfare.

The Israeli patrols further scoured Palestinian ranches in Jenin’s western town of Rummana and sealed off the main entrance to the area with a military checkpoint, in the second such move over the past couple of days.

Palestinian vehicles and passengers have been subjected to exhaustive inspection at the abruptly-pitched checkpoints.

The Israeli occupation forces (IOF) on Wednesday arrested two Palestinian youths from the Gaza Strip for allegedly trying to sneak into the 1948 occupied Palestinian territories.

Walla website reported that the IOF opened fire at the two youths injuring one of them near the border fence to the north of the Gaza Strip.

The Hebrew website claimed that one of the two Palestinians was “armed with a knife”, noting that the injured youth was transferred for treatment. The news has not been confirmed by any Palestinian source.

Many Gazans try to sneak into the 1948 occupied Palestine in search for job opportunities which are hard to find in the Gaza Strip in view of the decade-long blockade and the deteriorating living conditions in the enclave.

A Palestinian house was demolished on Wednesday morning in Froush Beit Dajan in the Jordan Valley, to the north of West Bank, under the pretext of being built without Israeli permit.

Head of the village council Tawfiq Mohamed told the PIC reporter that Israeli forces and Civil Administration employees broke into the town along with a military bulldozer before starting the demolition process.

The Civil Administration officials claimed that the demolished house was built in the Israeli-controlled Area C without permit.

Israeli media sources said that the confiscated goods were examined in a new laboratory established by Israel’s Land Crossings Authority at the crossing between Gaza and Israel.

According to the sources, lab experts examine a wide range of substances, using advanced equipment: gases, liquids, powders, metals and other substances – before the trucks carrying them are allowed to enter the Gaza Strip.

Israel prevents more than 500 kinds of goods into Gaza, affecting all sectors of economy, health and education, and delaying the implementation of the projects of the private sector and those sponsored by Arab and international institutions.

The Israeli occupation forces (IOF) on Wednesday demolished two Palestinian facilities in Khirbet al-Halawa in Masafer Yatta area to the south of al-Khalil.

Anti-settlement activist Rateb al-Jabour said that an Israeli military bulldozer broke into Khirbet al-Halawa and demolished a residential room and a sheep barn.

The Palestinian citizen Younis Abu Aram said that the IOF destroyed his room for the second time in two months leaving his family, as well as his sheep, in the open as winter approaches. 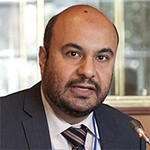 The “deal of the century” is the mystery phrase used amid the ongoing tension in the Middle East. It seems that this “deal” is so secretive that there are those who believe it is a delusion that will never get off the ground. Meanwhile, others confirm that arrangements have already been made and that the deal will surface in a matter of time, which will impose widespread Arab subjugation to the Israeli concept of a political agreement to end the Palestinian cause.

Any concern regarding such vague projects is justified. How else should we feel when the person who is supposedly the sponsor of the alleged new project, US President Donald Trump, boasts that he is the only person who can resolve the chronic crises in the region? He does so in his own way, using big sticks to force US allies and partners, before the fearful followers, to surrender to the plan.

The White House is well aware that the leaders of the Arab world are currently panicking over their fate and the future of their regimes. They are possessed by fear of their own people and rivals. Some of those who live in fancy palaces are throwing a reckless party full of surprises before the eyes of the world, and do not hesitate to sacrifice the rights of the Palestinians in order to guarantee US support for themselves. This wild state has pushed many of them towards actions that lack any rational, strategic logic. They do not care about the extortionate price to be paid for external political cover from the West for their authoritarian rule based not on the will of the people, but on security domination and empty promises. They compete to gain the pleasure of Washington and European capitals.

If it ever does get off the ground, the “deal of the century” between the Israelis and Arabs will establish a state subjugating the people to the power of tyrannical regimes. Rulers isolated in their palaces are counting on pleasing Western capitals by means of cooperating blindly with the Israelis and promises of “bold religious reforms”. They will also continue to talk a lot about “combatting terrorism and extremism” in order to receive Western praise.

Hence, it is no surprise for the Arab tyrants to get closer to Benjamin Netanyahu’s right-wing extremist government in Israel, with complete disregard for their own people, who have not been consulted about such “normalisation” of relations or possible agreements and effects. The people will have a fait accompli imposed on them by their rulers. Meanwhile, the Palestinian people, their inalienable rights and central cause in the region will be neglected with the launch of negotiations; these will be a formality, with optimistic smiles flashed at a new handshaking ceremony.

Concern is also justified because previous deals between Arabs and successive Israeli governments over the past four decades have not achieved justice. Instead, they have helped sustain and prolong the occupation, and strengthen its presence, while continuing to deprive the Palestinian people of their basic rights and ensuring Israeli military, political and economic domination.

In order to pass such a “deal” the will of the Arab people whose governments decide to go along with this new charade must be repressed. The people must be prohibited from expressing any doubts regarding the adopted approaches. What we are witnessing on the ground reinforces this; the Arab world is passing through a phase of tyranny and oppression. This is accompanied by a widespread retreat of the gains made in terms of media freedoms. The authorities dreaming of the “deal of the century” are currently dominating private media outlets and imposing specific content on social networks by means of strict laws to deter anyone from going against the official narrative, or even hinting threat. These authorities have also recruited “electronic armies” to flood networks with propaganda around the clock in favour of the ruler and government, seemingly as if the people are with them and all that they do.

Indicators suggest that the “deal of the century”, whether real or not, is a game of manipulation in this volatile region. It does not involve openness, transparency and respect for international law or basic rights. The result, in the best case scenario, will not be peace, but rather the exacerbation of existing crises and the explosion of issues that are bubbling under the surface.

Such a deal will only take place by pressuring the weak Palestinian leadership and forcing it to hide its pain in the face of what is being imposed on it and the region as a whole. It is clear that the pressure has already started, as evidenced by the American measure to close the PLO office in the US.

Ultimately, it would be delusional to assume that such a project, agreed upon between arrogant and reckless leaders like Trump, Netanyahu and some Arabs, would actually succeed in achieving what a century of projects and deals in the region has failed to do. Simply calling it the “deal of the century” does not make it so. Such projects and deals overlook fundamental facts in the region, the first of which is that there is a living nation promoting their cause and they have not decided to comply with tyrannical demands; the Palestinian nation will not surrender.

Israeli minister Naftali Bennett has reiterated his call for the occupied West Bank to be formally annexed, speaking on Monday evening at an event organised by pro-settler news site Arutz Sheva.

“[There is] a President who thinks different, who thinks open,” Bennett told the audience.

“It’s not enough to move the embassy to Jerusalem. It’s now 50 years since we liberated Judea and Samaria [the West Bank]. It’s time to recognise them as Israel. It’s time for sovereignty,” he added, using the term often used by the Israeli right to refer to annexation.

Describing himself, in his capacity as diaspora affairs minister, as “effectively the Minister of the Jews”, Bennett said: “We need to understand that the Jewish State is not only the state of the Israeli citizen, it’s a state where every Jew in the world has a stake here.”

Describing himself, in his capacity as diaspora affairs minister, as “effectively the Minister of the Jews”, Bennett said: “We need to understand that the Jewish State is not only the state of the Israeli citizen, it’s a state where every Jew in the world has a stake here.”

“Today, throughout the world”, Bennett continued, “there’s millions of Jews that need us to go and to reach out to them. And we’re doing more than we’ve ever done.”

Over 2 million Gazans have been living under strict Israeli siege since 2007 and young boys try to leave anyway, looking for better life

Israeli occupation forces shot and injured Palestinian and arrested another on Wednesday near security fence between blockaded Gaza Strip and Israel.

In a statement, the Israeli occupation army said its forces opened fire on two Palestinians, who crossed the border fence.

According to the statement, one of the two Palestinians was transferred to hospital for treatment while the other was detained for questioning.

Every now and then, Israel announces the arrest of Palestinians who attempt to cross from the Gaza Strip into Israel in search for work.