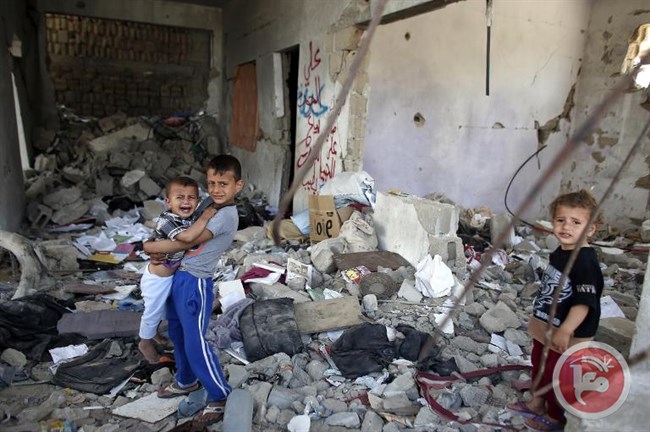 BETHLEHEM (Ma’an) — Ahead of World Humanitarian Day, to be marked on August 19th, as the United Nations (UN) prepares a global awareness campaign on the impact of conflict on humanitarian aid workers and the broader civil society, including children and families, the occupied Palestinian territory is facing a “worsening child protection crisis” brought on by 50 years of Israel’s military occupation, according to Jennifer Moorehead, director of Save the Children – Palestine.

“Today, there are more than 2 million Palestinian children who face increasing violations of their rights: displacement and forcible transfer, the demolition and destruction of homes and schools, arbitrary arrest and detention, harassment at checkpoints, and frequent violence and intimidation when they are simply trying to reach school, as well as when they are at school,” Moorehead said in a statement Thursday.
Moorehead highlighted the increasing erosion of children’s “basic right to education” in the occupied Palestinian territory, noting that there are more than 50 schools in the West Bank that have pending demolition orders or stop-work orders from the Israeli authorities.
“Just this week the kindergarten and elementary school in the Bedouin community of Abu Nuwar had their solar panels and batteries removed by the Israeli civil administration, limiting the school’s ability to function and denying children their basic rights,” the statement said.
According to Save the Children, in 2016 alone, there were “256 education-related violations” documented by UNICEF and Save the Children, affecting the education of 29,230 Palestinian students.
Between January and March 2017, the group documented 24 cases of “direct attacks” against Palestinian schools; many Palestinian students often come under fire from tear gas canisters and sound bombs on their way to school.
In 2016, more than 20,000 pupils lost important school time due to obstructions,such as delays at checkpoints or areas declared closed for Israeli military use, as well as the arrest and detention of children in and around schools, Moorehead said.
In the case of Gaza, where more than two million Palestinians suffer under a crippling Israeli siege, the humanitarian crisis has been exacerbated by an ongoing electricity crisis, that has left Gazans with little more than three to four hours of electricity a day.
“The education sector is facing a crisis of its own,” Moorehead noted, highlighting that 70.4 percent of UNRWA schools and 62.8 percent of schools run by the Ministry of Education operate on a double or triple shift system and are struggling to accommodate such a high number of students.
Moorehead said that as the start of the new school year is just weeks away, the energy shortages “will have a devastating impact on the ability of schools to operate and provide a safe environment for children to learn.”
“Save the Children, along with other agencies and partners, calls upon world leaders to take action to protect children’s inalienable right to safe access to a quality education and to guarantee the special protection afforded to children in areas of conflict,” she said.
“We call upon all duty bearers and world leaders to address the growing child protection risks in the education sector; to support and endorse the Safe Schools Declaration and the related Guidelines for Protecting Schools and Universities from Military use; and to take concrete and immediate steps towards the demilitarisation of school spaces so that children have safe access to education.”
According to Ma’an documentation, 72 Palestinian minors have been killed by Israelis since the beginning of a wave of increased unrest across the occupied Palestinian territory in October 2015,with the youngest victim being an eight-month old baby killed by excessive tear gas inhalation during clashes.
In a June report, the Palestinian Ministry of Information said that some 12,000 Palestinian children were detained by Israel in the span of 17 years, adding that the overwhelming majority of them were beaten or tortured while in Israeli custody, handcuffed, blindfolded, and forced to confess to charges in the absence of a lawyer or guardian.
In addition to the violence inflicted by Israeli forces, the ministry of Information deplored the effect of the decaying economic situation across the occupied Palestinian territory, particularly in the besieged Gaza Strip, on Palestinian children, forcing many children to drop out of school and join the labor market.
Quoting a 2013 report by the Palestinian Central Bureau of Statistics, the ministry stated that 4.1 percent of Palestinians between the ages of 10 and 17 were in the work force, while a more recent report by the Palestinian Ministry of Labor estimated that 102,000 Palestinian minors were working.
The Ma’an Development Center — which is not related to Ma’an news agency — has attributed the significant rate of child labor to poor conditions in Palestinian schools, particularly in rural areas of the occupied West Bank, where severe shortages of supplies and funding , as well as the long distances children need to travel to attend class, push many to drop out.
The Ministry of Information, meanwhile mentioned the case of Palestinian children in occupied East Jerusalem, 85 percent of whom live under the poverty line, who face a 40 percent drop-out rate in high schools, notably due to an estimated shortage of 1,000 classrooms in the city.