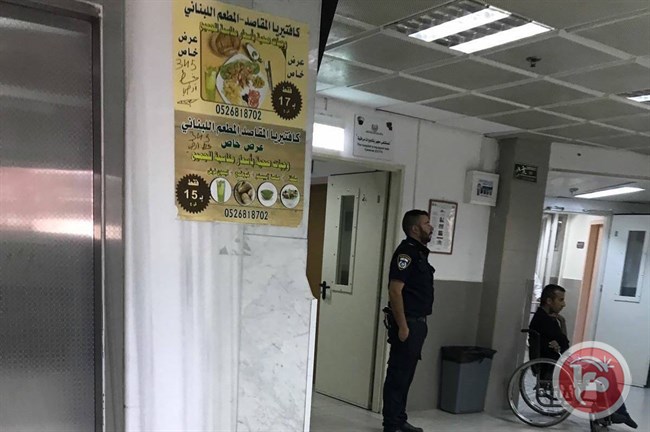 BETHLEHEM (Ma’an) — Human rights organization Amnesty International has condemned Israeli forces for multiple violent raids into an occupied East Jerusalem hospital, which has been struggling to treat hundreds of Palestinians who have been injured by Israeli forces in recent days in a brutal crackdown on demonstrations surrounding the Al-Aqsa Mosque compound.

In the span of ten days, Israelis killed four Palestinian demonstrators and injured more than 1,000 others, in protests against new Israeli security measures put in place at the holy site following a deadly shooting there on July 14.
Israeli forces stormed al-Makassed hospital at least twice over the past week in an attempt to detain the same protesters they had critically injured.
Israeli police and border police soldiers have been “terrifying staff and patients and in some cases preventing doctors from providing emergency medical care to critically injured patients,” Amnesty International wrote in a statement on Tuesday.
“The conduct of Israeli forces who carried out violent raids on al-Makassed hospital harassing and intimidating staff and patients is utterly deplorable. There can be no justification for preventing medical workers from caring for a critically wounded patient,” the statement quoted Magdalena Mughrabi, Amnesty’s regional deputy director, as saying.
During raids on July 17 and 21, armed Israeli forces caused “absolute mayhem” in the hospital, which is located just east of the Old City, the epicenter of the demonstrations resultant clashes.
Head of al-Makassed Hospital Dr. Rafiq Husseini told Amnesty International that on the night of July 17, between 20 and 30 heavily armed forces “harassed my staff and other patients and were acting in an aggressive manner… They acted without any legal basis, entering the hospital with machine guns and stun grenades and terrorizing the staff and other patients.”
While scores of wounded demonstrators poured into the hospital that day, the hospital’s medical director Dr. Bassam Abu Libdeh recalled Israeli forces chasing a 19-year-old through the hospital like “hungry dogs after their prey,” as the critically injured young man was “bleeding to death” from a gunshot wound in a thigh artery.
Head of reception al-Makassed Talal al-Sayed said that after working at the hospital for ten years, the violence he witnessed during the July 21 raid was completely unprecedented.
He described to Amnesty International how around 200 heavily armed soldiers broke into the hospital, detaining people and firing tear gas in their path while pursuing a young man with a critical chest wound all the way to the operating theater. “It was pure terrorization of the patients,” he said, describing how soldiers shoved and hit a doctor who was trying to care for the injured young man in the operating room.
The young man, Muhammad Abu Ghannam, died of his wounds. One of the nurses on duty at the time was quoted in the statement as saying: “I have never been so scared in my life. All I remember were loud sounds and pushing and screaming. It was total chaos… There was blood all over the place on the floor, on the walls.”
Shortly after Abu Ghannam succumbed to his injuries, shocking footage emerged showing Palestinians frantically hauling his body, wrapped in a bloodied sheet, over a wall behind the hospital in an attempt to prevent Israeli forces from seizing his remains.
Throughout the unrest, Israeli forces also obstructed patients from receiving care at al-Makassed’s clinic located inside the Old CIty, while raids have also been reported inside hospitals in Hebron and Ramallah.
“As the occupying power, Israel has a responsibility to protect Palestinian civilians and must respect their right to peacefully protest. They must ensure that their forces limit their use of force in accordance with international law,” said Magdalena Mughrabi, the Amnesty International official.
(Source / 26.07.2017)