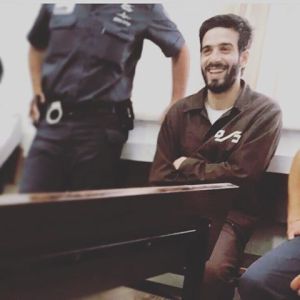 Safadi, 24, who has been imprisoned since 1 May while crossing the Karameh bridge between Jordan and Palestine’s West Bank, has been under interrogation consistently at Al-Moskobiya interrogation center since that time. His detention had been repeatedly renewed. Prior to the issuance of the administrative detention order, the Jerusalem Magistrate Court had decided to release him today on a bail of 2500 NIS (approximately $650 USD), which had already been paid.

Other Palestinian journalists like Samer Abu Aisha, Sami al-Saee and Samah Dweik are imprisoned on “incitement” charges for posting on Facebook about Palestinian politics and struggle, while Abu Aisha also faces charges for visiting neighboring Lebanon, an “enemy country.” Other imprisoned journalists targeted for membership in political parties include Hazem Nasser and Mujahid Saadi. They are among 19 journalists imprisoned in Israeli jails.