Skip to content
By now you have likely heard about the controversy over Hollywood star Scarlett Johannson and her love triangle between SodaStream, a company that manufactures products in an Israeli settlement and Oxfam, an international NGO that opposes settlements. The contradiction is obvious and for anyone still unclear, this info-graphic is helpful.

But one of the most pernicious responses in this debate from the anti-BDS crowd has been to claim that such a boycott would hurt Palestinian workers employed at SodaStream’s factory in the illegal Israeli colony of Mishor Adumim. The long and dark history of colonialism is littered with this sort of thing. Some Europeans justified the treatment of Native Americans because they were “civilizing” them. We witnessed similar arguments in more recent periods of colonialism in Africa, for example. The notion that systems of oppression can be justified because of the limited and perceived gains that they may afford to a few while dispossessing them and most of their kin in a variety of other ways is not new.

Yes, a Palestinian working in a settlement may not otherwise have a job. Unemployment in the West Bank is above 20%. The problem is that the settlements and the system they are part of reinforce the economic realities that force Palestinians into choosing working within the very system that oppresses them. 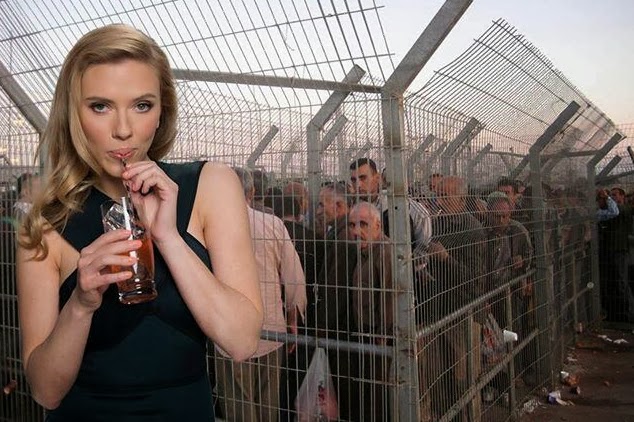 The problem is that many Palestinians are confronted with the choice of seeking livelihood within this system or having no livelihood to speak of. This is a reflection of the captive labor market dynamics of the occupation. Palestinians should have the choice to work for and within their own independent economy but they don’t. That is the problem here and it is a problem that is created, enforced and supported by Israeli settlements.

Yes, a small number of Palestinians may derive their livelihood from work on a settlement, but a much more significant number is suffering because of these settlements. To use the former to justify the later is absurd and yet it is precisely what Sodastream and the anti-BDS chorus has done in this case.

How do Israeli settlements impact the Palestinian Economy? The list is long and devastating but here are a few of the ways.

Land Confiscation – “Since the beginning of the occupation”, notes this Btselem report, “Israel has taken control of hundreds of thousands of dunam [four dunam = 1 acre] throughout the West Bank, with the primary objective of establishing settlements and providing reserves of land for their expansion. It has done this by means of a complex legal-bureaucratic mechanism whose central element is the declaration and registration of land as “state land.” In addition, Israel uses three complementary methods to seize control of land: requisition for military needs, declaration of land as abandoned property and the expropriation of land for public needs. In addition, Israel has also helped its Jewish citizens to purchase land on the free market for the purpose of establishing new settlements.67 Using these methods, Israel has seized control of some ﬁ fty percent of the West Bank, excluding East Jerusalem”

Restriction on Movement – “The establishment of Israeli settler-only roads and military zones” says Oxfam in this report on the Jordan Valley,  “means that many Palestinian farmers throughout the Jordan Valley are not able to access their farms. Tractors and other equipment are often confiscated, while herders are prevented from grazing their animals, which are often impounded for straying into a military zone. Palestinian herders must also buy wheat or barley to feed their herds, because they do not have access to their pastures.76 These significant additional costs incurred due to restrictions on access and movement are stifling production and driving many Palestinian households further into poverty.

Restriction on Access– This World Bank report talks about the impact of Area C of the West Bank which is where all the settlements are located and is off limits to Palestinians: “Area C constitutes 61 percent of the West Bank and is the only contiguous land connecting 227 smaller separate and heavily residential areas. The 1993 Oslo Peace Accords stipulated that Area C be gradually transferred to the Palestinian Authority (PA) by 1998. This transfer has never taken place….With growth of approximately six percent annually needed to absorb new entrants to the labor market, let alone making a dent in the soaring rate of youth unemployment, urgent attention is needed to find ways to grow the economy and create jobs. A vital economy is essential for citizen well-being, social stability and building confidence to underpin the challenging political negotiations. However, the Palestinian economy, which currently relies on donor financed consumption and suffers from ongoing stagnation of the private sector, is unsustainable. The report estimates that if businesses and farms were permitted to develop in Area C, this would add as much as 35 percent to the Palestinian GDP. Freeing economic activity in Area C would have a particularly high impact on the development of businesses in agriculture and Dead Sea minerals exploitation, stone mining and quarrying, construction, tourism, and telecommunications. Other sectors would be able to benefit from improvements in the quality and cost of infrastructure and increased demand for goods and services. The volume of increased economic activity would greatly improve the PA’s fiscal position. It is estimated that government revenues would increase by US$800 million, which would cut the fiscal deficit by half, hence reduce the need for donor support, and reduce unemployment and poverty rates.”

Resource Usurpation– “For four decades”,  states Amnesty International in this report, “Israeli military orders issued ostensibly to “protect” nature resources and reserves, including water resources, have had a crippling impact on Palestinian agricultural activities throughout the West Bank, while Israeli settlers, during the same period, have been given virtually unlimited access to water supplies to develop and irrigate the large farms which help to support unlawful Israeli settlements.”

Settler Violence – “Settler violence” says this recent UN OCHA special focus case study “has severely undermined the livelihoods of many families in this area, contributing to the relocation of some people in search of better livelihood opportunities elsewhere, including abroad. Those who continue to farm incur financial losses, partly because of difficulties in cultivating their land consistently, and because of the damage to their property or theft of their crops by settlers, in which case they lose both the money invested as well as the potential earnings from selling the crops.”

There really is no debate about the impact of settlements on the Palestinian economy. The impact is devastating, in large part because of the reasons listed above. Anyone arguing settlements have had anything but a negative impact on Palestinians and their economy is either misinformed or disingenuous or both. Sodastream is part of this system and this system has done exponentially more to hurt Palestinians than anything else.