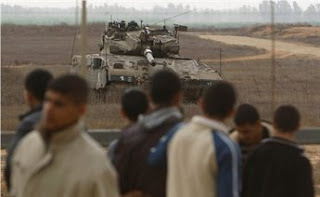 On 21 November 2012, Israel and Hamas came to a ceasefire agreement to end the 14 day attacks that had killed many and injured hundreds of innocent civilians starting 14 November.The terms of the latest agreement include ending all hostilities by Israelis and Palestinians, and facilitating the freedom of movement and transfer of goods within Gaza. Though mainstream media has been silent, Israel has violated these simple truce points continuouslysince they were agreed upon. Not only are the crossings still very restricted, but the fire into Gaza continues, with the first one occurring only four days after the truce agreement.

Here we list some of Israel’s breaches of the ceasefire agreement and will continue to update as events occur. We’ll keep track even as others look away.

“Two people were shot by Israeli forces east of Rafah on Monday, a health ministry spokesman said, in the second consecutive day of shooting along Gaza’s border.” (Read more)

“Israeli forces detained nine fishermen off Gaza’s north coast on Wednesday, a local official said. As part of a ceasefire to end Israel’s recent eight-day war on Gaza, Israel agreed to allow fishermen to sail six nautical miles off the coast of Gaza instead of three, which had been the limit under Israel’s siege” (Read more)

“Israeli military vehicles crossed near the al-Qarara town northeast of Khan Younis on Thursday in a new breach of the Gaza ceasefire, a Ma’an reporter said.” (Read more)

“On Friday, 11 Palestinians sustained wounds by Israeli fire along the borders between the Gaza Strip and Israel.” (Read more)

“The Israeli navy on Saturday stopped 13 Palestinian fishermen and detained them off the coast, a Gaza official said.” (Read more)