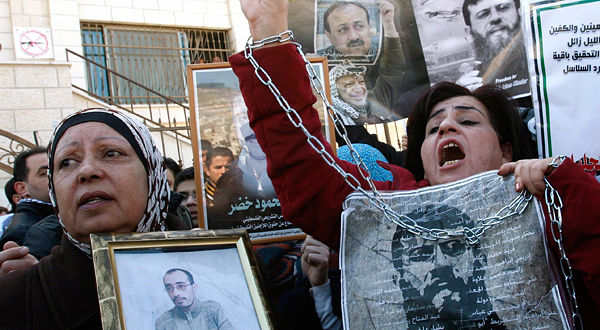 Palestinians protested in support of Khader Adnan, an Islamic Jihad leader, and their relatives jailed in Israel, in the West Bank city of Nablus on Monday.

JERUSALEM — Israel’s High Court is slated to hear an urgent petition on Tuesday in the case of a Palestinian detained without charge who has been on a hunger strike for two months.

The hearing had first been scheduled for Thursday but his lawyers and human rights groups representing the hospitalized 33-year-old detainee, Khader Adnan, were worried that he would not survive that long.

Mr. Adnan’s case challenges a decades-old Israeli practice employed almost exclusively against Palestinians, thousands of whom have been detained by military court orders under similar circumstances for months and even years. He is already being hailed a hero in the West Bank and Gaza.

Mr. Adnan is not the first Palestinian to have gone on a hunger strike, but his — 66 days long as of Monday — has proven the most enduring. A medical report prepared last week by an Israeli-accredited doctor on behalf of Physicians for Human Rights-Israel, and filed along with the petition to speed his hearing at the High Court, stated that Mr. Adnan was “in immediate danger of death” and that “a fast in excess of 70 days does not permit survival.”

Whether Mr. Adnan’s case ends in legal victory or death, it is likely to have far-reaching consequences.

Thousands of Palestinians now in Israeli jails have declared that they will take steps in solidarity with Mr. Adnan, and there are growing concerns in Israel that his death could lead to unrest.

Mr. Adnan began his hunger strike on Dec. 18, a day after he was taken from his village, Arraba, in the northern West Bank, according to Addameer, a Palestinian organization that supports prisoners and is providing legal aid in the case.

The father of two small girls, he works as a baker, but has been identified by Palestinians as a leader of Islamic Jihad, an extremist organization that has carried out suicide bombings and fired rockets from Gaza into southern Israel. He was previously detained by the Palestinian Authority in 2010.

A spokesman for the Israeli military, Capt. Eytan Buchman, said only that Mr. Adnan’s latest detention “stems from involvement in actions that threaten regional security.” Administrative detention, he added, “is a tool used when information pertaining to a case is based on sensitive sources that cannot be released.” Defendants retain the right to appeal in the military court and the High Court of Justice.

Critics say that the secret nature of the evidence amounts to arbitrary arrest and makes it impossible for administrative detainees or their lawyers to mount a proper defense.

Mr. Adnan was issued a four-month detention order on Jan. 8 and it was confirmed by a military judge a month later. A first appeal was rejected on Feb. 13.

In the three weeks between Mr. Adnan’s arrest and the detention order, he was interrogated. Yet Israel still did not produce a charge sheet or evidence linking him to violent Islamic Jihad activity, according to Jawad Boulus, one of Mr. Adnan’s lawyers.

“We are asking for him to be released on grounds that they have nothing against him,” Mr. Boulus said.

Administrative detention orders can apply for up to six months, but they can also be renewed repeatedly.

“In Arabic we have a term for it,” said Shawan Jabarin, the director of Al Haq, a Palestinian human rights organization based in the West Bank city of Ramallah. “It is like reburying a corpse again and again.”

Mr. Jabarin has himself spent a total of seven years in administrative detention, including a two-year stint in the late 1990s.

A doctor from Physicians for Human Rights-Israel visited Mr. Adnan at the Ziv Medical Center in Safed, northern Israel, on Sunday, as did his family and his lawyer.

Mr. Adnan was lucid and able to communicate, said Anat Litvin, the director of the group’s prisoners and detainees department.

Mr. Adnan has consented to liquid infusions containing salts and minerals to help stabilize his condition, but has refused any nourishment and could collapse at any moment, she said.