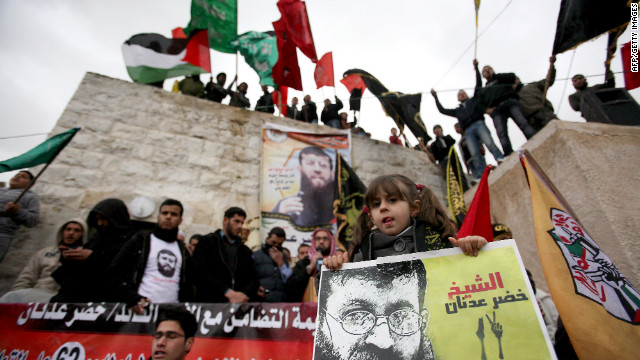 Palestinian prisoner Khader Adnan’s daughter Maali takes part in a protest in support of her father, who is on hunger strike.

Jerusalem (CNN) — A 33-year-old West Bank baker who has become a symbol of Palestinian resistance to Israeli detention policies entered the 63rd day of a hunger strike Saturday despite a doctor’s warning that he could die any time.

“Mr. Khader Adnan is in immediate danger of death,” according to a report issued this week by the Israeli branch of the nonprofit Physicians for Human Rights, which sent a doctor to examine him.

Adnan’s two-month protest is the longest hunger strike in Palestinian history and is a high-stakes gamble that increased scrutiny on Israel’s arrest and detention policies of Palestinians.

Adnan is accused of being the spokesman of the Palestinian militant group Islamic Jihad, an Iranian-backed organization responsible for killings scores of people in Israel in suicide bombings and rocket attacks.

Adnan was arrested by Israeli security forces December 17, 2011, at his home near the West Bank city of Jenin. He began a hunger strike after accusing interrogators of subjecting him to humiliation and verbal abuse, said Adnan’s wife, Randa.

The rights group has petitioned the Israeli court to release Adnan, saying that after 50 days of undergoing a hunger strike, the body’s major muscles and vital organs suffer decomposition. More than 70 days “does not permit survival,” the group said.

The Israeli military will not say what evidence it has against Adnan and has refused to release details about his arrest, saying only he is being held on an “administrative warrant for activities that threaten regional security.”

To date, no charges have been filed, Adnan’s attorney said.

Adnan is being held in administrative detention, a controversial Israeli practice that allows authorities to detain people indefinitely. There is no requirement to charge detainees held under this practice.

At the end of 2011, Israel had 307 Palestinians under administrative detention, according to B’Tselem, an Israeli human rights group. That was a 40% increase in the number of detentions from a year earlier, the group said.

Israeli prison authorities said in a statement that Adnan is being treated in compliance with the policies of administrative detentions, “with special attention given to his humanitarian situation.”

Physicians for Human Rights said Adnan was receiving an intravenous feed of liquids, salt and glucose.

Adnan’s wife denied her husband was involved in any violent activities. She said despite previous arrests, Israel has never produced evidence he was a senior figure within the Islamic Jihad.

Islamic Jihad has warned Israeli authorities not to harm Adnan, and photos and tributes fill a website maintained by the group.

The group has a history of taking up anti-Israeli causes.

Adnan’s hunger strike has become a rallying cry for Palestinians, who have staged multiple protests in the West Bank and Gaza demanding his release. Protesters have also launched a social media campaign to shed light on Israel’s administrative detentions.

“This is a violation of every aspect of human rights,” Palestinian legislator and human rights activist Mustafa Barghouti said during a recent West Bank rally.

“What Khader Adnan is doing today is to show the will of freedom even it means the loss of life.”

The high-profile hunger strike has sparked criticism from rights groups, which have called on Israeli authorities to either charge or release him.

Israel’s Supreme Court has agreed to hear Adnan’s petition that he be released, though a hearing date has not been set, his attorney said.