Danny Abduldayim: This revoluton is for the Syrian people, its not for the muslim arab world http://www.youtube.com/watch?feature=player_embedded&v=nRFK0x0WEF0#! #Syria

Boycott the countries that voted no. Don’t but any cocaine, blood diamonds, child prostitutes, bad cigars or slave labour

Seriously, 2 countries (have the right of Veto) control the decision of 137 countries?? #Syria

Jaafari pretending he hates Israel while Assad bombards his own people with rockets and mortars, not Israeli positions in the Golan

Bashar Al-Jaarfari=pathetic. “congrats for this new alliance between the Arab League and Israel” #Syria #UNGA

@ArabSpringFF He did his best. I mean he did mention google & Microsoft & they banned apple iPhones. I remember the drugged sandwiches

FULL TEXT: @AmbassadorRice on the successful #UNGA resolution on #Syria: “Asad has never been more isolated.”

The real benefit of today resolution is the exposure of the ” No” camp. They are the minority and they know it. #Syria #UNGA

Today, the UN General Assembly sent a clear message to the people of Syria: the world is with you. An overwhelming majority of UN member states have backed the plan put forward by the Arab League to end the suffering of Syrians. Bashar al-Assad has never been more isolated. A rapid transition to democracy in Syria has garnered the resounding support of the international community. Change must now come.

This resolution strongly condemns Assad’s 11-month campaign of murder and torture. It demands an end to the killing machine. It demands that the Syrian government release all political prisoners; assure the freedom of peaceful demonstrations; and guarantee full and safe access to Arab League representatives and international media, and to humanitarian aid workers, who seek only to protect a people who have endured unimaginable violence.

The international community has just given its firm support to the Arab League’s plan to facilitate a Syrian-led political transition to a democratic, plural political system, “in which citizens are equal regardless of their affiliations or ethnicities or beliefs.” The only question is how many more women, men and children—from demonstrators on Syria’s streets to those taking shelter in homes and hospitals—will suffer or be killed by Assad before that transition begins.

The people of Syria, from Homs and Damascus to Hama and Idlib, from Aleppo to Daraa, should now know that the nations of the world stand with you and support you as you pursue a future of freedom and safety. 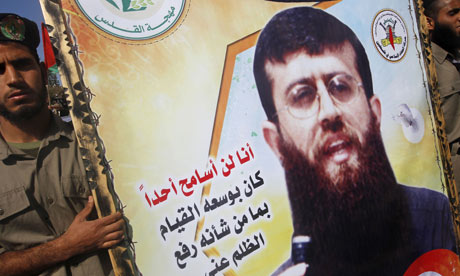 A Palestinian prisoner on his 61st day of hunger strike while shackled to a bed in an Israeli hospital is in immediate danger of death, according to a medical report submitted to the supreme court in an effort to secure his release.

Khader Adnan, 33, a baker from a village near Jenin, is being held without charge by the Israeli authorities under a four-month term of “administrative detention”. He began his hunger strike on 18 December, the day after being arrested.

Adnan’s lawyers have submitted a petition for his release to Israel‘s supreme court, but no date has been set for a hearing. The situation was urgent, lawyer Mahmoud Kassandra told the Guardian. “This is the last chance. The medical report says he could die at any minute. We hope this will succeed but I am not optimistic.”

Adnan’s hunger strike is in protest at his detention without charge or being told of any evidence against him, and over his claims of abuse and degrading treatment during arrest and interrogation. This is his ninth period of detention, according to reports. In the past he has acted as a spokesman for the militant group Islamic Jihad.

He was examined by a doctor from Physicians for Human Rights on Wednesday at the Rebecca Ziv hospital in Safed. Adnan was shackled by both legs and one arm, the doctor reported.

“He has lost 30kg and weighs 60kg. He suffers from stomach aches, vomiting, sometimes with blood, and headaches … His general condition is pale and very weak, his tongue is smooth, he has slight bleeding from the gums, dry skin, loss of hair, and significant muscular atrophy. His pulse is weak, blood pressure 100/75. He is permanently connected to a heart monitor.”

Adnan agreed to be treated with an infusion of liquids and salts, with the addition of glucose and vitamins, the doctor reported. “However, he maintains his refusal to end his hunger strike.” He was lucid and aware.

He was “in immediate danger of death,” the doctor concluded. “An absolute hunger strike in excess of 50 days causes the decomposition of muscles… and the creation of toxins in the body. Death may occur suddenly, due to heart failure or the result of infection following the collapse of the immune system. Bleeding in the digestive tracts and renal or hepatic failure are possible.

“A fast in excess of 70 days does not permit survival. Infusion of liquids, adjustment of salts, and the addition of glucose and vitamin cannot prevent certain death due to such a protracted hunger strike.”

Adnan’s wife, Randa, his two daughters and his father were permitted to visit him on Wednesday, although his mother, sister and brother were refused.

“Randa told me he was very thin and his health was worsening but his mental health is good,” his sister Maali said from the family home in Arrada. “But the whole family is worried, and Randa doesn’t know if she will see him again.”

Adnan’s elder daughter, also called Maali, who is nearly four, understood her father is very sick and was anxious about giving him a hug, the older Maali said. “She is telling her mother, please stop crying.” The younger daugher, Bissan, is 18 months and Randa is six months pregnant with the couple’s third child.

Following the visit, Adnan’s father addressed a demonstration outside the hospital in solidarity with Adnan, reporting that his son’s morale was high. “He does not undertake this hunger strike for its own sake, but he yearns for freedom for his people, for his countrymen, in order to live with heads held up high, without occupation,” Jihad Adnan told protesters.

Thousands of Palestinians and other supporters of Adnan have protested in the West Bank and Gaza, and outside Ofer military prison near Jerusalem. There have been clashes with police, who have fired tear gas and rubber bullets.

According to Addameer, a Palestinian prisoners’ support group, detainees in other prisons have also begun refusing food.

Many protesters say Adnan has become a symbol of Israel’s occupation and its treatment of prisoners. More than 300 Palestinians are held under “administrative detention” orders in Israeli prisons.

The Palestinian Authority has appealed for Adnan’s release. Physicians for Human Rights on Thursday urged to Israel’s president, Shimon Peres, to intervene in the case because of the prisoner’s dire medical condition.

Earlier this week, an Israeli military court rejected an appeal against Adnan’s continued detention. The Israeli prison service has said Adnan was being dealt with in accordance to his “definition as a security-administrative prisoner” and with humanitarian sensitivity.

Adnan’s hunger strike has attracted a big following on Twitter and Facebook. Many of his supporters complain his case is being ignored by the mainstream media. There has been little coverage in the Israeli and international press.

Bobby Sands, the Irish republican prisoner who died on hunger strike in a Northern Ireland prison in 1981, lasted 66 days without food. According to the British Medical Association, death generally occurs between 55 and 75 days of a hunger strike.

Russia had warned that it would block any U.N. resolution calling for Assad to step down over his crackdown on an 11-month uprising estimated to have killed more than 5,400.
Russia has opposed a draft resolution on Syria at the U.N. General Assembly, saying it focuses entirely on Bashar Assad’s regime and fails to address the armed opposition, a top Russian diplomat said Thursday.

“We can’t vote for that resolution, because it still remains unbalanced,” Gatilov said, according to Russian news agencies. “It directs all the demands at the government, and says nothing about the opposition.”

Arab League countries, meanwhile, called on the U.N. for the immediate implementation of the Arab plan on Syria and the adoption of the General Assembly draft resolution on Syria.

General Assembly resolutions cannot be vetoed and are nonbinding, but they reflect world opinion on major issues. Supporters of the Arab-sponsored resolution hope for a high “yes” vote to deliver a strong message to Assad’s regime.

Arab countries have rejected amendments to the resolution proposed by Russia.

Gatilov said a U.N. Security Council resolution would be required to send any U.N. peacekeepers to Syria.

Russia had warned that it would block any U.N. resolution calling for Assad to step down over his crackdown on an 11-month uprising estimated to have killed more than 5,400.

Moscow has maintained close ties with Damascus since the Cold War, when Syria was led by the current leader’s father, Hafez Assad.

Earlier on Thursday, Russia asked for a number of changes to the draft resolution on the crisis in Syria scheduled for the U.N. General Assembly vote.

One of the amendments Russia wants is on a paragraph referring to the Arab League plan of Jan. 22 that calls for Syrian President Bashar al-Assad to hand over power to his vice president. Moscow opposes any change to the regime imposed from outside, according to AFP.

Another change would link the return of Syrian troops to their barracks to an “end of attacks by armed groups against state institutions.” Russia has insisted on acknowledging an opposition role in the violent unrest.

Russia also wanted the opposition “to dissociate themselves from armed groups engaged in acts of violence,” and not mention Syrian government abuses against civilians.

The Arab group, which is formally responsible for the draft in the General Assembly, declined to include the Russian changes.