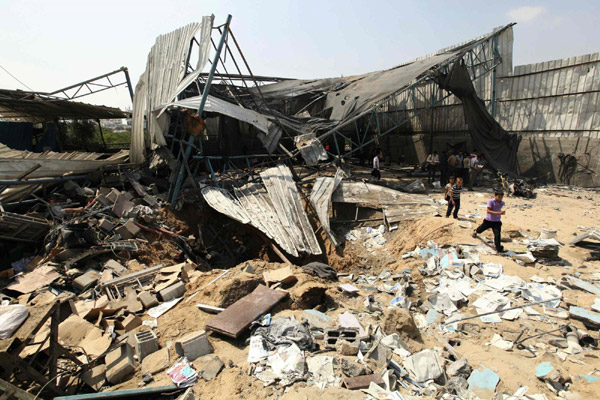 GAZA, PALESTINE- When the heat is turning on Israel ‘Events’ start to happen, that turn the attention of the world to another issue. The recent rocket attacks according to Israel to be the excuse for the last missile launching inside Gaza. Israel long history of deceptive practices to gain support for their cause is well known, black opts that show up always right on target, at the right moment, at the precise time never fail.

When Palestinians Christians started showing support for the Palestinian cause, a number of Christian Churches were targeted around the world by “Muslim Mob”, when Ortodox Jews started supporting Palestine and speaking in that regard, Synagogues around the world were targeted by “Muslim Mobs”. It is obvious for us that have been following the conflict more closely that this “attacks” are purposely done by Israel or her supporters. And off course these attacks are never are claimed by Palestinians factions or Palestinians supporters.

We know that the resistance factions inside Palestine have their own agenda and work very much on their own. The elected government of Gaza, Hamas does not control those factions. The same way that the IOF forces can not control the radical actions of the settlers that continuously harass Palestinians inside the occupied territories.

There is something well known in the world of World News, when an attack is successfully or unsuccessfully done by any Palestinian Resistance Groups inside Israel or the Palestinian Occupied Territories, there is a sort of pride of telling the world who perpetrated the attack, even if they did not achieve their goal, which ever it could have been. They feel that standing against this powerful Entity and her army is a duty because they are fighting against an entity that have stolen their land and is continuously murdering their love ones. They tell the world that they did it, that they try. There has never been an attack from the Palestinian resistance that was not been claim, except if that attack was not from one of them.

There are rumors that some of the groups working inside Gaza and West Bank are undercover Israeli agents pretending to be Palestinians and they live inside Palestine and work against Palestine, those rumors can not be confirm, but who will say “Yes I m Spy”, Israel collaborators are usually put to death, so is unlike it that we will ever know if they really exist. But we know that some groups act against Palestine long term interest, even thought they think to serve a purpose.

The resistance groups inside Palestine usually do not agree with most of the agreements signed by their respective leaders, they feel betrayed by their leaders that most of the times end up being pressure by the US or the European Union to suppress their own people. Not that they have any other choice, their hands seems to be tied up most of the time.

An ordinary Palestinian sees the conflict with their simple mind and their struggles transpire in their everyday life. The people of Gaza are being targeted by missiles, sonar bombs, an strangulating economy that is asphyxiating them, a social infrastructure destroyed, Israel drones do not distinguish between a school, a mosque or a home, their drinking water is polluted, dirty waters running in front of their houses, high incidence of radiation from Israel bombs, cancer related to radiation, psychological trauma in most of the population, high unemployment rate, youth lost to uncertain future that engage in violent acts and drugs. I mean we can go on and on and lay out all the deficiencies of their everyday life and they see it as simple as ‘End Up the Occupation’, do not sign agreements with the enemy, because in their mind Israel is the enemy, they do not understand the Game of Politics that always goes against their simple well being, their future, their bare necessities never meet, their human rights violated, how could they understand or accept that their leader is not acting in Palestinians behalf? But who in their right mind will accept to be exiled, starved, make refugee, make homeless, murdered and not complain about it? Who Would?

Israel recent attacks in Gaza seems to follow the same pattern of the 2009-2010 massacre, where more than 1500 Palestinians got killed. The attacks never really ended since Israel withdrew from Gaza in 2005 they only got more vicious. They have better war technology than they did in 2005, their experiments are being perfected. The damages are more lethal, and what the UN Club is doing? Nothing, absolutely nothing. What the US is doing? they are making more difficult for Palestine to survive another year, but even against all the odds, the international community of peace and social activists and Palestinians are getting ready for September, the big date for the drafted resolution to be presented In the UN, for Palestine to be finally recognized as a Free Nation.