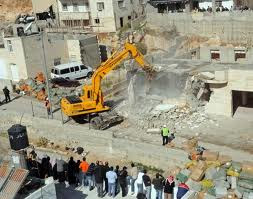 An international coalition of 20 aid agencies and human rights groups, includingAmnesty International,Human Rights Watch, and Oxfam International, stated on Monday that Israel has stepped up unlawful demolitions in the West Bank including East Jerusalem over the past year, displacing a record number of Palestinian families. They also said that this sharp rise in demolitions has been accompanied by accelerated expansion of settlements and an escalation of violence perpetrated by settlers.

The statement of the 20 groups  coincided with a meeting of Middle East Quartet in Jerusalem in its latest effort to revive peace talks. The 20 criticised the approach of  the Quartet and said it should hold all parties to the conflict to their international law obligations. The Quartet should, therefore, press the Israeli government to immediately reverse its settlement policies and freeze the demolitions that violate international law.

Jeremy Hobbs, Executive Director of Oxfam Internationa said: “The increasing rate of settlement expansion and house demolitions is pushing Palestinians to the brink, destroying their livelihoods and prospects for a just and durable peace. There is a growing disconnect between the Quartet talks and the situation on the ground. The Quartet needs to radically revise its approach and show that it can make a real difference to the lives of Palestinians and Israelis.”

Sarah Leah Whitson, Middle East director at Human Rights Watch, added:  “The Quartet should call ongoing settlement expansion and house demolitions what they are: violations of international humanitarian law that Israel should stop.”

And Phillip Luther, Middle East and North Africa Interim Programme Director of Amnesty International, called “Israel’s escalating violations” an illustration of  “the fundamental failure of the Quartet’s approach. It’s time for the Quartet to understand that they cannot contribute to achieving a just and durable solution to the conflict without first ensuring respect for international law.”

The evidence of rapidly deteriorating situation on the ground, the organisations said, includes:

It was time that human rights organisations sounded this alarm and called on the Quartet to stop pretending it was trying to create an atmosphere in which one could talk peace, as far as I´m concerned. What, however, is missing from this statement is adhesion by Israeli and Palestinian organisations. The only thing I discovered that goes in the same direction is an observation by the Israeli Committee Against House Demolitions (ICAHD) that Israel has been speeding up its demolitions and expulsions during this year 2011. One wonders why the Israelis and Palestinians aren´t there.