Syria’s opposition, though fractious, is making headway against the regime

IF IT took over, the Syrian National Council (SNC), the main opposition to President Bashar Assad, would sharply alter the regional dynamic. Burhan Ghalioun, a Sorbonne professor who is its leader, says that Syria’s special relationship with Iran, its main ally, would end. Relations would also change for the worse with Hizbullah, the Lebanese Shia party-cum-militia whose popularity in Syria has plummeted thanks to its support for the regime.

This may bolster the SNC’s standing with Mr Assad’s enemies abroad, especially those in the United States who see in Syria’s conflict a chance to isolate Iran and tilt the regional balance of power against it. But Mr Ghalioun’s comments did not go down well with some colleagues, who think he jumped the diplomatic gun. Nor did some rude remarks he made about the Kurds, an important minority in Syria.

Mr Ghalioun has yet to win the avuncular mediating status of his Libyan counterpart, Mustafa Abdul Jalil, now the interim president. Since Syria’s opposition is mostly Sunni Muslim, reflecting the country’s 75% Sunni make-up, he needs to win over Alawites and Christians, each about a tenth of the population, who have generally stayed loyal to Mr Assad. And he must corral the Free Syrian Army of defectors bent on toppling the regime by force.

Barely two months old, the SNC is still fragile. Many of its members, both in exile and within Syria, grumble that policies are often conjured up on the spur of the moment and are sometimes naive. Views differ within the SNC on whether to seek foreign intervention. And some SNC members think Islamists are over-represented. The enthusiasm of Turkey’s Islamist government for the SNC may account for the Islamists’ disproportionate presence in it.

The Free Syrian Army is also causing problems for the SNC. It is probably smaller and less united than its leader, Colonel Riad Asaad, says; he claims 15,000-plus men under his command. Assorted defectors have become more audacious, targeting security checkpoints and intelligence buildings. But the SNC is trying to keep the uprising peaceful and wants to bring the Free Syrian Army under tighter political control. Representatives of the council and the army recently met in Turkey and agreed to co-ordinate, with the soldiers promising to scale back their attacks. But a few days later defectors killed seven pro-government soldiers at a checkpoint in the north-western province of Idleb.

The defectors think the SNC too timid. Borderlands close to Turkey, Jordan and Lebanon are becoming more violent; some opposition people want outsiders to create buffer zones and humanitarian corridors. Syria’s third city, Homs, is virtually under siege. The UN now says more than 5,000 Syrians have been killed, mostly by security forces, since the upheaval began. At least 14,000 are said to be behind bars.

Wary Western diplomats describe the SNC, whether or not it can contain the Free Syrian Army, as “the best we have”, though it is far from achieving the recognition given to the National Transitional Council in Libya at an early stage in its rebellion. Turkey and France are the SNC’s keenest backers. Britain has made a former ambassador to Lebanon its special envoy to the Syrian opposition, in essence the SNC. 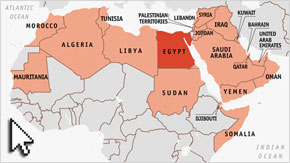 Western and Arab diplomats are also encouraging the SNC to co-ordinate, if not to merge, with the National Co-ordination Committee, a rival opposition group that still functions within Syria and is led by Hassan Abdul Azim and other longstanding dissidents, some of whom are wary of the Islamists within the SNC. The Arab League, with Qatar to the fore, is particularly keen to bring the two groups together.

Since it took the unprecedented step of imposing sanctions against Syria last month, the league is the key to diplomacy aimed at bringing Mr Assad down. Western governments, which have steadily tightened sanctions against Mr Assad, are taking their cue from it. So far Russia and China have refused to consent to any measures in the UN Security Council similar to those that helped get rid of Muammar Qaddafi. It will be for the league to persuade them to fall into line.