SAN’A, Yemen—President Ali Abdullah Saleh of Yemen agreed to step down on Wednesday after 33 years in power, becoming the fourth Arab leader swept away by protests this year and launching his violence-wracked country into a new era of uncertainty. 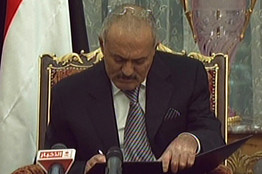 The agreement transfers power to vice president Abed Rabbo Mansour Hadi within 30 days, kicking off a process that will elect a new president within three months and hand significant power to opposition parties, according to Yemen state television and opposition officials.

Protesters massed in San’a’s central Change Square following the announcement, angrily denouncing the agreement’s provision of immunity from prosecution for Mr. Saleh. Protesters demanded that Mr. Saleh be trailed and his immunity be stripped, and blamed the country’s established opposition parties for letting the leader escape after months of bloodshed they say killed more than 1,000 people.

“No immunity to the killer Saleh,” they shouted. “We will not go home until justice prevails.” 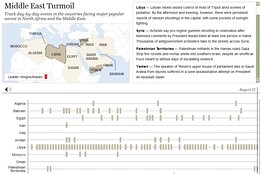 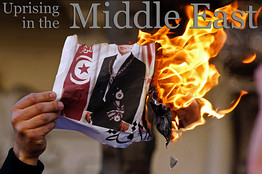 Yemen has been ravaged by violence and lawlessness in recent months, as forces opposed to Mr. Saleh fought battles against his allies in the streets of the capital. Amid the chaos, militant Islamist groups, including some sympathetic with al Qaeda, have expanded their sway in the south of the country.

“We are sorry for what happened in Yemen and we were hoping that transfer of power would take place democratically,” Mr. Saleh said in a speech after inking the deal in the Saudi Arabian capital of Riyadh. “The differences created problems for national unity and destroyed what was built in the last couple of years.”

Beginning in January, Mr. Saleh faced large youth demonstrations calling for his resignation. In recent months, long-time allies among Yemen’s traditional tribal power brokers turned against him. After he was seriously injured in a June assassination attempt and taken to Saudi Arabia for treatment, he agreed to sign on to the power-transfer deal, negotiated by Arab states in the Persian Gulf.

But until Wednesday, he had repeatedly backed out of opportunities to finalize the agreement. He returned to Yemen several months ago and appeared to dig in further.

The poorest country in the Arab world, Yemen nonetheless sits in a strategically critical location at the mouth of the Persian Gulf, where one-fifth of the world’s oil exports transit to world markets. The country has been a critical, if sometimes fitful, ally of the U.S. in fighting al Qaeda, which has established a foothold in the country as its base in Afghanistan and northwestern Pakistan have come under pressure.

It is unclear what caused Mr. Saleh to fly unannounced to the Saudi capital of Riyadh to finalize the agreement in front of Yemeni opposition leaders, officials from the Gulf states and several Western allies and an envoy from the United Nations.

UN Secretary General Ban Ki-Moon told reporters after a phone call with Mr. Saleh that the president would soon fly to New York City for medical treatment. The nature of the treatment wasn’t immediately clear.

Mr. Hadi, who has served as Mr. Saleh’s vice president for 17 years, is now expected to form a national reconciliation government, bringing on board politicians from all factions. Half the ministers are expected to be members of the former ruling party and its allies, while the other half will be chosen from the traditional opposition.

Mr. Hadi will preside over a military Council to prepare an overall restructuring of the armed forces, ensuring that no faction has the monopoly over the strategic state institution. The vice president, who hails from the country’s south, is generally accepted by opposition factions as a credible person to lead after Mr. Saleh.

The agreement doesn’t lay out a formal role for the youth protesters who have demonstrated continuously for nine months, demanding not just Mr. Saleh’s ouster but also sweeping political reforms. The agreement stipulates that the government will have to open a dialogue with the youth aimed at ensuring their demands are met.

On Wednesday, young protesters in San’a vowed to continue their watch. “Our revolution will start today,” they shouted. “Saleh’s fall is Step One.”