Retired US Gen. Stanley McChrystal, former head of US and NATO forces (168,000) in Afghanistan recently addressed a meeting arranged
by CFR, one of America’s most powerful pro-Israel think tank headed by Zionist Jew, Dr. Richard Haass. He admitted that Americans including himself did not know the past history of Afghans’ military resistance to their foreign occupiers. “We didn’t know enough and we still don’t know enough,” McChrystal said. “Most of us, me included, had a very superficial understanding of the situation and history, and we had a frighteningly
simplistic view of recent history, the last 50 years.” 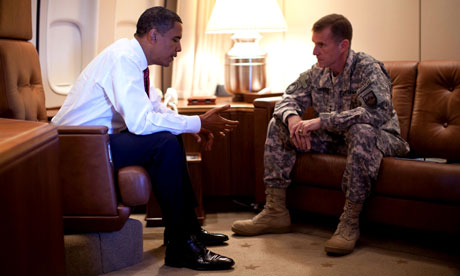 In 2009, Stanley McChrystal, angered the Obama’s Israel-Firster administration by demanding more American boots on ground rather than relying on drone missile strikes. He said that Vice-president Joe Biden’s (a pro-Israel Zionist Christian) recommendations will turn Afghanistan into
“Choas-istan”. An irritated Obama summond the General aboard Air Force One and
told him to “shut up and keep a low profile“.

Several high-ranking military officials agreed with Stanley McChrystal and predicted a failure of US-NATO mission in Afghanistan and return of Taliban rule. According to independent military sources, Taliban and their allied groups already control 80% of Afghan territory. Once Afghanistan returns to Taliban rule – the Jewish Lobby is
affraid Jewish mafia will loose lucrative drugs market and expected Caspian oil supply to Israel.